If you've ever typed "when do you capitalize" into a search engine, you could probably use a refresher course in standard English capitalization. While many rules in English writing conventions are a little confusing, capitalization rules are quite easy to remember. Keep reading to learn when to capitalize a word — and when capitalizing isn't grammatically correct. 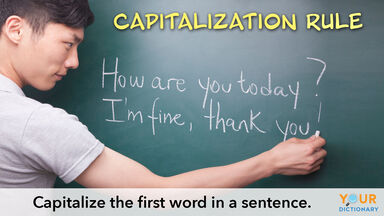 The First Letter in a Sentence

It's important to always capitalize the first letter of a sentence. This is perhaps the easiest and most straightforward of the capitalization rules, as there are virtually no exceptions or other complications. If it's the first word in a sentence, capitalize it.

Categories of proper nouns include:

You can form proper adjectives from nearly every proper noun. Note that you wouldn't capitalize any prefixes (such as "pre-Shakespearean" or "post-Orwellian") or hyphenated words (such as "Irish-born" or "Christian-minded").

It's only necessary to capitalize other pronouns when they begin a sentence. However, the pronoun "I" is always capitalized, no matter where it falls in a sentence.

Books, movies, poems, and other creative works often require capitalization for their titles. It depends on the style guide you're using, but generally, you capitalize the following words in a title:

The first letter of a work of art is always capitalized, even if it's an article, preposition or conjunction. The last word of these titles always receives a capital too.

The First Word in Quotations

If the sentence is a quotation within a larger sentence, capitalize it, but only if it's a complete sentence. If it's merely a phrase that fits neatly into the larger sentence, it doesn't require capitalization. Here are some examples:

Not only do you capitalize the first letter of a person's first, middle and last names (John Quincy Adams), but you also capitalize suffixes (like Jr., the Great or Princess of Power) and titles. Titles can be as simple as Mr., Mrs. or Dr., but they also apply to situations in which you address a person by his or her position as though it were part of their name.

Capitalize people's titles if they come before the person's name or are used instead of the person's real name.

The same goes for family titles, such as "Uncle Joe" or "Grandma Janet." However, if you're not using the title as a name, you wouldn't capitalize it.

Acronyms, where the first letter of each word comes together in a new word, are always capitalized. Examples include:

They're often pronounced as a single word, but you wouldn't spell them "Nasa" or "Fifa." It's the same rule for initialisms in which you pronounce each letter, such as:

Finally, you always capitalize initials when a person goes by the first letter of each of their names. Famous examples include:

When you look at a calendar, almost every word is capitalized. That’s because you should always capitalize days of the week and months of the year (even when they’re abbreviated). Additionally, holidays are also capitalized whenever you write them.

When we sign off on letters, we generally close with a valediction like "Sincerely" or "Yours truly." The first word in these farewell words or complimentary closes should be capitalized, just like the beginning of a sentence. For example:

Wishing you all the best,
Sarah Smith

If you'd like to include your title after your name, that must be capitalized too.

The signature is only one important component in a letter. For the full picture, here's how to write a letter.

When Not to Capitalize

There are a few specific instances that tend to confuse people when it comes to capitalization. Take a look at these general rules for when you should skip that capital letter.

Unlike words after quotation marks, words after a colon don’t need to be capitalized (unless, of course, it's a proper noun). Colons are often used before the introduction of a list. Similarly, you generally don't capitalize after a semicolon. And because a comma doesn't end the sentence, you don't need to capitalize the word after it, either.

There's a difference between Washington Middle School and middle school — one is a proper noun, one is a common noun. Words like middle school or elementary school are common if you're not talking about a specific school, so they are not capitalized. This rule also applies to nouns that follow proper adjectives, such as "Apple computer" and "Honda sedan."

Even though we capitalize days, months and holidays, not every word related to a calendar falls under this capitalization rule. We don't capitalize the four seasons of winter, spring, summer, or fall (or autumn) unless it's part of a title or proper noun.

If you're telling someone to go in a certain direction, you don't need to capitalize that direction. There are specific direction capitalization rules about when you should capitalize east, west, north, and south, but if you're describing the direction, you won't capitalize it.

Whether you're majoring in political science or mechanical engineering, you don't need to capitalize the first letter of your academic focus. The same goes for a subject that you're studying, such as math or language arts. The only exception for capitalizing subjects is if the subject is the name of a class, such as British Literature or Algebra II.

Your birthday, anniversary and other special occasions are momentous days, but that doesn't mean they should be capitalized. If you're wishing someone a "Happy birthday," you don't need to capitalize "birthday." (Of course, if you're spelling it in all capital letters on a banner or cake, go capitalization crazy!)

No matter what you write, there will be moments when you'll have to decide whether or not to capitalize a word. It only takes a little bit of practice and, the more you read and write, the more these rules will stick. Once you feel like a capitalization pro, check out these special cases for capitalization. Ever heard of capitonyms? They're the snowflakes of the English language that change meaning when you capitalize them. Have fun out there!