Are Directions Capitalized? Easy Ways to Know When

Capitalization rules seem like they can be all over the map. In the case of writing direction words (north, south, east, and west), that's literally the case! So when are directions capitalized? Take a look at these quick tips for deciding when to capitalize directions, when to avoid capitalizing them and when the answer isn't quite so simple. 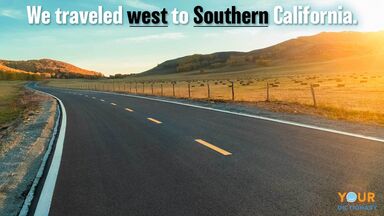 When to Capitalize Directions

When writing directions, it seems like they should be capitalized. And they are — in specific situations. Check out the instances when capitalizing a direction word is the grammatically correct thing to do.

If you've read about Southern California or the East Coast, you know that direction words are capitalized in these cases. But that's because those regions are specific, well-known areas. Other examples of well-known geographic areas include:

These regions are proper nouns. You can tell if an area is well-known if you don't need any more details to describe it. For example, if you tell people that you live in "the deep South," they would likely know that you mean the area that includes Alabama, Mississippi, Louisiana, South Carolina, and Georgia in the U.S.

Adjectives for Well-Known Regions and Nouns

The same rule applies for specific regions when you add -ern onto the end of a direction. This suffix makes the direction an adjective, and when it describes a specific region, it should be capitalized. The direction word makes it a proper noun.

Note that the common nouns "states," "seaboard" and "hemisphere" become proper nouns when you add their direction words. "Northern Ireland" is part of the United Kingdom, unlike "northern Ireland," which is the north part of the Republic of Ireland and not part of Northern Ireland at all. Capitalizing these phrases helps to clarify what you're talking about.

Another time to capitalize direction words is when you're describing habits, practices or activities from a specific culture. When a direction word is associated with that culture, you capitalize it. For example:

The nouns after the capitalized direction words aren't capitalized but are still specific to that region. Changing the direction word in front of each word changes its meaning, as each one means something specific.

When Not to Capitalize Directions

Directing someone in the north, south, east, or west direction doesn't require capitalization. In these cases, you're telling somewhere where to go or where something is located, not talking about a specific place. For example:

While locations like West Virginia have direction words right in their name, places that aren't commonly described with direction words aren't capitalized. Chances are, if you're only using the direction word to be more descriptive and not to talk about a specific region, you don't need to capitalize it. Check out these examples of general geographic regions:

Like with compass directions, these directions describe where something is generally located. They're not describing specific regions, so you don't need to capitalize them.

Describing People: It Depends on the Style Guide

Describing people from a region is a situation where you need to consult your style guide. The AP style guide, for example, requires words like Southerner and Midwesterner to be capitalized. However, the Chicago Manual of Style prefers to keep southerner and midwesterner in lowercase. If you're not using a specific style guide in your writing, it's up to your personal preference.

Capitalizing directions isn't as tricky as it looks. Now that you know when you capitalize the words north, south, east, and west, as well as northern, southern, eastern, and western, you're well on your way to grammar perfection! Keep the lesson going with these special capitalization cases that can help you in your writing.