Capitalization of Job Titles: When Is It Necessary?

Knowing when to capitalize job titles can be tricky: Is it an official title or just describing someone's role? The rules for the capitalization of job titles depend on the order of the words, the use of the words, and whether or not the job title is used as part of the person’s name. 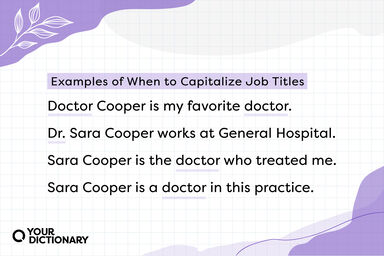 Examples of When to Capitalize Job Titles
Advertisement

When deciding how you should capitalize a job title, keep the following general rules and guidelines in mind. These guidelines hold true for all job titles. The answer to the question, "Do you capitalize president?" will be the same as for any other job title. These guidelines are consistent with all major style guides, including APA, AP, Chicago, and MLA.

Capitalize a job title that comes immediately before the person’s name or is used as part of their name when addressing them. In this case, the job title is usually replacing their first name, though it can also be used in addition to their first name.

If the job title comes after the person’s name or is used instead of the person's name, then it is generally not capitalized. This would be the case with Sarah Smith, chairman of the board; Holden Lavesque, accounts receivable clerk; or the governor of California.

However, there are exceptions to this rule:

The rule of capitalization of job titles applies to abbreviations too. So, General Grant would be written as Gen. Grant. You wouldn't use the abbreviated form after a person's name, though. It would be incorrect to write "Joan Smith, acct. mgr., is present." Here, you would write the full job title "account manager" and keep it lowercase.

It can be helpful to see these rules used in context. Here are some examples of these rules in sentences:

Job titles aren't only included in writing that would fall under one of the major style manuals. They are commonly included in job search documents such as resumes, cover letters and reference lists. The same guidelines listed above apply to resumes, as well as a few special considerations.

People often include their job title in their email signature line or when closing a business letter. In this case, the job title would be capitalized.

Know When to Capitalize Job Titles

To summarize the capitalization of job titles, you should always capitalize the job title when it comes immediately before the person's name, in a formal context, in a direct address, in a resume heading, or as part of a signature line. It should not generally be capitalized if it comes after the person's name, or if there is a “the” before it. Now that you have mastered how to capitalize job titles, you're ready to master other capitalization rules. Start with mastering how to capitalize other kinds of titles.