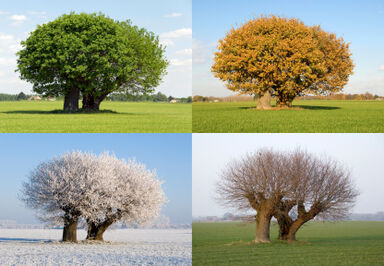 The four seasons of a tree
Advertisement

Seasons, such as winter, spring, summer and fall, do not require capitalization because they are generic common nouns.

Some people may confuse these words as being proper nouns and try to capitalize them using that rule of capitalization. This can make some intuitive sense, as you capitalize the days of the week (e.g., Wednesday) and the months of the year (e.g., August). However, the four seasons are not proper nouns and, consequently, do not need to be capitalized.

Here are a few examples of the seasons used correctly in their lowercase form.

The general distinction between common nouns and proper nouns is that the former are generic and the latter are specific. However, even when referring to a specific season, the term remains lowercase.

When a season is used in a title, the capitalization rule that applies to titles should be utilized. For example, movie titles like Winter's Bone and The Kings of Summer are capitalized as such.

This is also true when the season is part of an official name or title. Some example sentences can help to illustrate this:

One obvious exception to these two rules would be if the season were being used as the first word in a sentence. For example, “Summer is my favorite time of year.”

Another exception to the above rules would be for stylistic purposes in poetry, particularly if the season were to be personified. This excerpt from “The Sensitive Plant” by Percy Bysshe Shelley is a great example.

And Spring arose on the garden fair,

And each flower and herb on Earth’s dark breast

Rose from the dreams of its wintry rest.

A Time and a Place

Unless you are referring to a specific title or an official name, chances are that you will not want to capitalize the names of the seasons. The notable exceptions would be at the beginning of a sentence or when a season is being personified.

Now that this has been cleared up, why not spend some time learning about how to capitalize animal names correctly too? Is it Cocker Spaniel or cocker spaniel?