The capitalization of songs, as you might suspect, should be done similarly to the capitalization of other titles. To punctuate, the song titles are generally written with a double quote ("Title Here") around them. Any punctuation that is part of the title, such as commas, exclamation points or question marks, should also go inside the quotation marks. Discover what you need to know to properly apply the rules of song title capitalization. 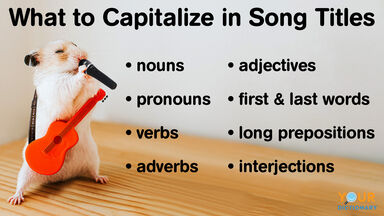 what to capitalize in song titles
Advertisement

Song titles usually follow other common title capitalization rules. In English, the first letter of certain words should be capitalized when writing the name of a song.

In most situations, conjunctions (and, but, or) and articles (a, an, the) should not be capitalized in song titles (or any other titles). This is true unless they are covered under the first rule, which would mean that they have to be capitalized due to being the first or last word in the title.

Capitalize All Other Parts of Speech

With the exception of articles, conjunctions and short prepositions, words that represent all other parts of speech should be capitalized when used in song titles. This includes verbs, nouns, pronouns, adverbs, adjectives, and interjections.

It is a common misconception that short verbs with only two or three letters (is, am, are, be) should not be capitalized. However, this is not the case. All verbs should be capitalized when used in song titles. This includes even the shortest helping verbs.

When a song title includes a phrasal verb, which is a group of words that functions together as a verb, all of the words in the phrase should be capitalized. This is true regardless of word length or part of speech. There are many examples of phrasal verbs.

Review a few examples of phrasal verbs likely to be used in song titles, where they should always be capitalized:

Even though song titles are similar to other types of titles, there are special cases for capitalizing song titles. Artists even sometimes make up their own rules. It's important to capitalize song titles in a manner that is consistent with their official name, as designated by the songwriter or artist who is performing the song.

Musicians sometimes deliberately capitalize song titles in a way that isn't consistent with conventional capitalization rules. For example, the official name of "HUMBLE" by Kendrick Lamar has no lowercase letters.

All Lowercase Letters in Titles

Opting for all capital letters in a song title is not the only way a song title might deviate from formal capitalization or language usage rules, such as abbreviating words in a nonstandard way. In such cases, you would proceed the same as with a title that is written in all lowercase or all capital letters. For example, Ariana Grande's song "thank u, next" is deliberately written in all lowercase letters and the letter "u" is used as a substitute for the word "you."

There are a few commonly confused punctuation issues associated with song titles that are important to consider.

Deciding between italics vs. quote marks is a common source of confusion when including song titles in text.

Headings and Titles vs. Text

And the Beat Goes On

The capitalization of songs should be done properly when writing titles in essays or articles. Foreign language song titles should follow the capitalization rules of that language. Now that you know the rules of song title capitalization, maybe you'll write about them even more! Use this list of descriptive words for music for inspiration!