The capitalization of states is an easy rule to remember. The names of each state represent specific places and must be capitalized. However, there are a few other grammar rules to be aware of when it comes to writing the names of states. 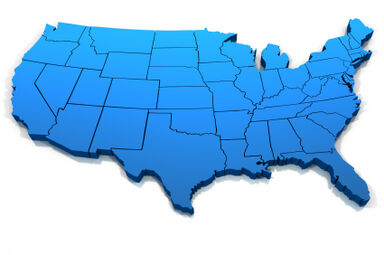 A map of the United States
Advertisement

When deciding whether the first letter in a state should be uppercase or lowercase, keep these capitalization rules in mind.

Because state names represent specific places, they are always capitalized. If they are paired with a specific city or town, the first letter of the city’s name will also be capitalized. A comma should come between a city and state to properly punctuate it.

While state names are often shortened to their two letter abbreviation when addressing an envelope or writing an inside address, a state name used in formal writing should always be written out completely. This includes in news articles, short stories and personal essays.

For example, the two letter abbreviation for New Jersey is NJ. However, it is rarely seen in writing in that form except for mailing purposes. The rules are more relaxed in casual writing, like social media, but it is always better to err on the side of formality when in doubt.

Some state names have a direction attached to them, including:

When using the word "states" or "the States" in writing, the capitalization of states will depend on the meaning and intended usage.

If the writer is referring to the United States and calling it just the States, then states needs to be capitalized. If states is being referred to in a general manner, such as “There are two senators for each state,” then the word states would remain lower case.

When referring to the physical location, both the Associated Press (AP) Stylebook and the Chicago Manual of Style indicate that the word "state" is not capitalized in cases like "the state of California" and "the state of Missouri." The word "state" would be capitalized, however, when referring to the governmental body. For example, "The State of New York filed to dismiss the motion."

The State of Affairs

When the word "state" is used in a more general sense, and not referring to the states within the United States in particular, it follows the same capitalization rules as all other common nouns. Examples would include when you are discussing the deep state or talking about a state of consciousness. It is only capitalized if it is the first word in a sentence or it is formalized as a proper noun.

Otherwise, when discussing the states in the United States of America, follow the rules and guidelines laid out above and you'll be well on your way.