If you familiarize yourself with common title capitalization rules, it will be easier to write articles, papers, and other pieces. Although the capitalization of words in titles can sometimes depend on the particular style of a writer, institution, or publication, there are some general rules to keep in mind. 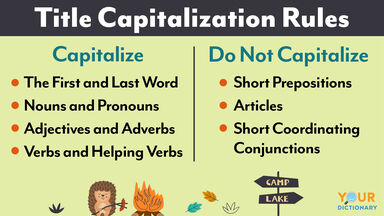 The rules for capitalization in titles of articles, books, papers, speeches, and other documents can vary according to a particular style guide, such as The Associated Press Stylebook, The Chicago Manual of Style, and MLA Handbook. However, no matter what style guide you use, these rules usually hold true.

Capitalize the First and Last Word

In all three styles, always capitalize the first and last word of any title. These examples will help:

You should capitalize nouns and pronouns in titles in all three styles. This includes proper nouns. You can see this rule in action in these examples:

No matter which style you are using, you'll also need to capitalize verbs. This includes helping verbs and variations on the verb "to be." These examples will help:

You should also capitalize adjectives and adverbs in all three styles. You can see this rule in action here:

Do Not Capitalize Short Prepositions

Each style has its own rules for how long a preposition needs to be if you're going to capitalize it in a title. However, no matter which style you're using, prepositions of three letters or fewer are lowercase unless they are the first or last word in the title. These examples will show you:

Do Not Capitalize Articles

In all three styles, you should not capitalize articles in the title unless they are the first or last word in the title. Articles include "the," "a," and "an," as you can see here:

Do Not Capitalize Short Coordinating Conjunctions

Short coordinating conjunctions like "and," "but," "or," "for," or "nor" are lowercase in titles in all three styles. Here are a few examples:

While you will find similarities between each guide, it's important to pay attention to their differences. These are the specific rules and special cases you should consider for each style.

In the AP Stylebook, all words with three letters or fewer are lowercase in a title. However, if any of those short words are verbs (e.g., "is," "are," "was," "be"), they are capitalized.

In Chicago style, all prepositions are lowercase unless they are the first or last word of the title. These include the lengthier ones, such as "between," "among," and "throughout."

In MLA style, words with three letters or fewer are always lowercase. The exception here is if they are the first or last word of the title.

What About Sentence Case?

Now that you know the ins and outs of title case, let's take a look at sentence case.

In sentence case, the title is written as if it were a sentence. This is considered a more casual style and is commonly used in newspapers and on the web for headline capitalization. There are a couple reasons why writers choose sentence case over title case:

Capitalize Only the First Word in Sentence Case

In sentence case, only the first word has a capital letter. Consider these examples:

Ordinary nouns and pronouns are not capitalized in sentence case. However, proper nouns within the title are still capitalized:

One of the complexities of the English language is that, for every rule you learn, there's probably an exception. Here are some advanced rules for title capitalization.

Let's take a look at The Chicago Manual of Style's guidelines for hyphenated words in titles:

An open compound comes to life when a modifying adjective is used in conjunction with a noun. This creates a new noun. Hopefully, warning bells will signal in your mind, as nouns are almost always capitalized.

Both Chicago and AP Stylebook guidelines say you should capitalize the first word after a colon in title case:

In sentence case, you should capitalize the first word after a colon if it begins an independent clause.

In sentence case do not capitalize the first word after a colon if the clause cannot stand alone.

Prepositions That Belong to a Phrasal Verb

Prepositions often find themselves on the "do not capitalize" list. However, when a preposition becomes an important part of a phrasal verb, it does need to be capitalized.

When you're in doubt and you do not have a reference guide in front of you, here is one general rule recommended by The U.S. Government Printing Office Style Manual:

Furthermore, no matter your personal preference, make sure you write the exact titles of books, newspapers, journals, and other publications as they are written on the original document (even if they do not follow common capitalization rules).

Knowing the general rules for capitalization in titles can help make the writing process easier. Many of these rules also work for headline capitalization in articles as well. Take some time to familiarize yourself with these basic guidelines, and you'll be all set the next time you need to write a bibliography or reference a title in your writing.