If you’ve written in English, you probably know to capitalize words at the beginning of a sentence, and always to capitalize the pronoun "I" and the first letter of names. But did you know that there are also special cases for capitalization, some of which surprise even expert writers? Read on for detailed explanations on when and why to capitalize in unusual circumstances. 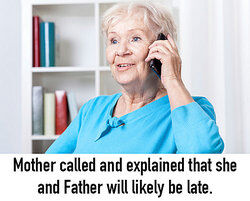 Mother talking on the phone about Father.
Advertisement

Capitonyms are very special cases in English capitalization. These are words that change meaning, and sometimes pronunciation, when you capitalize the first letter.

Here are a few capitonym examples to illustrate how they work:

When to Capitalize Directions

Directions are another special case for capitalization. At first glance, “We traveled North, South, East and West!" seems like an appropriate use of capitalization.

In truth, directions only need to be capitalized when they’re proper nouns. The reason directions are so often capitalized is that they’re frequently used in the names for specific things or places. For example, “we drove across the South” is correct if the author is using “the South” as a name for the southern part of the United States. By contrast, “we drove south” doesn’t require a capital letter.

Some other common examples include:

Historical terms can be confounding to capitalize. When writing about historical eras or issues, the line between formal names and general terms often blurs. However, the same general rule applies: only a specific name referring to a specific thing, differentiating it from every other thing, requires a capital letter.

Family, personal and official titles are another case where specificity is everything. A title gets capitalized when it’s part of someone’s name, even if that name is used in a casual context. If it doesn’t refer to a particular person or name, it takes the lower case. So "aunt" would be capitalized whether you said "I invited Aunt Marie over" or "I invited my Aunt Marie over" because both times the word "aunt" precedes the person's name. If you were to say "I invited my aunt over" the word "aunt" would not be capitalized as it's a generic term.

It may sound tricky, but take a look at another example. When a sentence says “President Trump was in his office in Washington,” there’s only one person it could possibly be. The title of President is part of the subject’s name, and takes a capital letter just as a name does. In a sentence like “the president of our bank was in his office in Washington,” rather than standing in for a name, it refers to a position that could be occupied by anyone.

Here a few more examples of when and how to capitalize people's titles:

An Exception to Every Rule

As always, English has a rule for every situation and an exception (or ten) to every rule. That said, ask the following three questions when deciding if you should capitalize:

If so, capitalize. If not, don’t. For further help, check out our articles on Rules for Capitalization in Titles and Capitalization of Seasons. Happy writing!