'Barbecue' Is an Interesting Word: So Where Does It Come From?

You’re a grill master — nay, the king of the grill masters. When people smell that smoky meat emanating from your backyard, they’re clamoring for an invite. You’ve got the gear, the rubs, the skills, and the reputation, and you know absolutely everything about the art of barbecue, except maybe one thing: Where does the word barbecue come from? 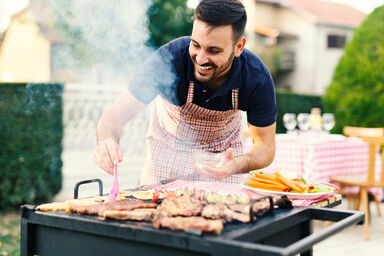 Even the smokiest pit boss around may scratch their head at that one. Is barbecue a Spanish word? Maybe French? Has it always meant “cooking meat over fire”? And can knowing the origin of barbecue actually make your grill skills even better? The answers are: sort of, no, yes, and definitely.

Barbecue is known as an American tradition, and for good reason. George Washington himself was a frequent barbecuer (making your President’s Day barbecue an even better idea than you thought). But barbecue actually started with the Taino, a subgroup of the Arawakan tribe located in Haiti and other islands in the Caribbean.

Barbecue comes from the Taino word barabicu, which means “sacred pit” and describes the act of cooking meat slowly over an open flame. When Spanish explorers discovered this cooking style in the 1600s, they called it barbacoa and brought it to their settlements in the now-Southern United States and Mexico. It was first recorded by Samuel Johnson as barbecue in 1755 in The Dictionary of the English Language, and the rest was (flame-cooked) history.

There’s a common theory that barbecue comes from barbe à queue, which is French for “from head to tail” and could describe the act of cooking a whole pig. But barbe actually means “beard” in French, leaving one with a somewhat unappetizing mental image of a bearded pig being roasted. “Head to tail” would actually be tête à queue, which sounds good, but… not like barbecue.

But Isn’t It Spelled Barbeque?

If the spelling of barbecue has been driving you crazy this entire time, you’re probably not alone. Barbeque is a perfectly acceptable (and until recently, preferred) way to spell the word. While barbeque is considered to be a variant spelling of barbecue, chances are good that people will RSVP “yes” to either a barbecue or a barbeque, depending on who’s grilling.

Barabicu, BBQ and Everything in Between

Other names for barbecues and barbecuing include:

Avoid a Missed Steak in the Future

The next time you fire up the grill for an all-American holiday, you can serve up some etymological knowledge alongside those burgers. For more trivia that’s good enough to eat, check out: