Have We Always Said 'Goodbye?' The Origins of the Parting Term

Some of us are just bad at goodbyes. Just the thought of a loved one leaving for a long period of time (or even a short period of time) … yup, here come the waterworks. But luckily for us, our forefathers were really good at goodbyes — so good, in fact, that they actually invented the word “goodbye” out of a lovely parting phrase. 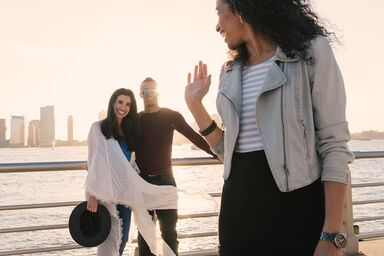 Goodbye: God Be With Ye

The word goodbye is a shortened version of the archaic phrase “God be with ye” (spelled godbwye), a common closing to letters in the late 16th century. If you squint at goodbye, you can still kind of see it: Good is God, ye is at the end, and the rest is mixed up in the middle somewhere.

Inspired by Middle English expressions such as “Good day” and “Good morrow,” godbwye got closer to goodbye in a number of different versions, including god-b’wye, god buoye and good-b’wy, before landing on its current form. But the first recorded usage was in a 1573 letter by writer Gabriel Harvey, quoted in Letter-book of Gabriel Harvey:

Firste for your acre of commendacions
I resende you a furlonge of salutations;
And then to requite your gallonde of godbwyes,
I regive you a pottle of howdyes.

The personification of politeness, Harvey exchanges a “gallon of godbwyes” with a “pottle (half-gallon) of howdyes (“how do ye’s"). Try that line out the next time a goodbye brings you to tears.

So why did 16th century writers smush all their words together? Future generations may wonder the same thing about our OMG, LOL and TL;DR expressions. We probably owe our innovative texting slang to these OG’s (Original Grammarians), although there’s no way they could have foreseen the invention of the smartphone and its Candy Crush delights.

So What About Hello?

Since hello and goodbye are conversational buddies, you'd think that they entered the English language around the same time, right? Not so. Hello is not nearly as old as goodbye — it gained popularity in the early 1880s as a variant of the greeting “hail,” when Thomas Edison suggested “Hello” as a way to answer the newly invented telephone. (Inventor Alexander Graham Bell wanted the greeting to be “Ahoy,” but we can’t always get what we want.)

Other Words For a Fond Parting

Wishing God’s presence with a departing loved one isn’t exclusive to goodbye (or even godbwye). You’ll find a similar sentiment in:

More Little-Known Words For Your Next Correspondence

Dry your tears and dole out more word-related trivia during your next dramatic goodbye. Here’s some more great words to use when it’s time to say “Hello” again: