What's a 'Monday'?: How the Days of the Week Got Their Names

You probably know “TGIF” as something you comment to a coworker before a weekend, or maybe an awesome lineup of sitcoms from the 90s. But when you say “Thank God It’s Friday,” you should be thanking Frigg, the Germanic goddess of love, since she puts the Fri- in Friday. So where do the other days of the week fit in — and why is Wednesday spelled like that? The answer lies in our solar system. 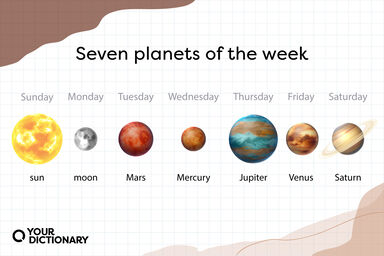 Solar System Planets And Days of the Week
Advertisement

Day Name Origins: Gods, Space and Everything in Between

The word Sunday doesn’t sound too complicated. There’s a sun, there’s a day, that’s a wrap. But the full story is more complex than a simple compound word. Sunday comes from the Latin dies Solis after the Roman sun god Sol. It became sunnandæg in Old English, sunnenday in Middle English, and eventually, Sunday.

All that makes sense until you translate Sunday into a Romance language, where the English Sunday becomes the Spanish domingo, the Italian domenica and the French dimanche. Why the change? Sunday is known as “Lord’s day” (dies Dominicus) in these Latin-based languages.

Monday: The Moon Gets Its Day

What does the word mon look like to you? If you said moon, you’re right. While the Latin word for moon is luna (and Monday is dies lunae), the name Monday comes from “Moon’s day” after the Norse moon god Máni. It’s derived from the Old English Mōnandæg, later Monenday. Maybe that’s why it’s so tempting to stay in bed on Monday morning — you need more time to celebrate the moon.

Tuesday isn’t typically known as the most aggressive day of the week, but it’s named for one of the most aggressive mythological figures. It comes from the Norse god Tiw, god of combat (his Roman equivalent is Mars). “Tiw’s day” was Tiwesdæg in Old English and Tewesday in Middle English. The Romans stuck with Mars in the Latin dies Martis, which is why Tuesday is martes in Spanish, martedì in Italian and mardi in French.

Wednesday: Just Speed Through It

Another language split between English and Latin happens on good old hump day. The name Wednesday comes from the Old English Wōdnesdæg after the Germanic god of speed, Woden (also called Odin) and “Woden’s day.” It became Wednesdei in Middle English and eventually Wednesday in the 13th century A.D. But because the Roman equivalent of Woden was Mercury, the Latin name for Wednesday is dies Mercurii (miércoles in Spanish, mercoledì in Italian, mercredi in French).

Thursday: Thunder in the Forecast

Can you guess which Norse god is the namesake of Thursday? If you’re up on your mythology (or you’re a Marvel fan), you know that the god of thunder, Thor, appears in this day of the week (“Thor’s Day”). The old English þunresdæg became Thuresday in Middle English, but remained Iovis Dies (from the Latin spelling of Jupiter, Iuppiter) in Rome. Thursday looks and sounds a lot more like Jupiter in Spanish (jueves), Italian (giovedì) and French (Jeudi).

Friday: Even Lovelier Than You Thought

If you wake up full of happiness and love on Friday, it’s not just because your work week is over in approximately 9.5 hours. Friday is “Frigg’s day” for the Germanic love goddess (known as Freya in Norse mythology). Originally frīġedæġ in Old English, your favorite day of the week is dies Veneris in Latin, celebrating Frigg’s Roman equivalent, Venus. That’s why Friday is viernes in Spanish, venerdì in Italian and vendredi in French.

For anyone keeping track, there’s likely no mystery surrounding Saturday — it sounds exactly like the only planet left in the Hellenistic system. The last day of the week is named for the Roman god Saturn and is the only day without another god equivalent, as the Germanic and Norse cultures didn’t have a god assigned to this day.

“Saturn’s day” was Sæturnesdæg in Old English and dies saturni in Latin. However, Romance languages refer to the Latin word for sabbath (sabbatum) rather than Saturn; Saturday is sábado in Spanish, sabato in Italian, and samedi in French.

Hopefully, knowing which day was named for the god of war helps you get through a boring Tuesday (or at least gets you to the next Woden’s day). For more ways that Latin has influenced ancient mythology and modern English, check out: