Why Is It Called Eggnog? There's Some History Behind the Term

Every Christmas, families who celebrate the holiday fall into two factions: those who love eggnog and those who think it’s a vile concoction. But what is eggnog anyway, and where did it come from? Whose bright idea was it to mix egg yolks, milk, alcohol, and sugar? This divisive holiday drink has a history as rich as its flavor. 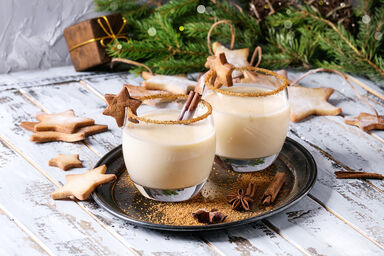 How Did Eggnog Get Its Name?

The etymology of the word eggnog is a little murky. The egg part is obvious, but what about nog? The origin of nog is uncertain, but it means “strong ale or beer from Norfolk” and dates back to the 1690s. Nog may share the same origin as noggin, a Middle English word meaning "a carved, wooden mug." Another possible origin is grog, meaning "an alcoholic beverage diluted with water."

A form of eggnog originated in 13th century England when monks were known to drink a mixture called posset: milk mixed with wine or ale and sweetened or spiced. Posset notably lacked eggs, but over time, the recipe evolved and merged with punches to include milk and various types of alcohol such as wine, brandy or sherry. These ingredients were all scarce and typically reserved for the wealthy. Eggnog became a popular drink to toast health and prosperity.

As people moved west to the American colonies, farms and access to dairy products became far more abundant. The term eggnog made its first appearance in America in the 18th century, perhaps in 1775. The first recorded use of eggnog was in 1775 when a clergyman Jonathan Boucher wrote a poem about the drink:

"Fog-drams i' th' morn, or (better still) egg-nogg,
At night hot-suppings, and at mid-day, grogg,
My palate can regale."

The drink became so popular that even George Washington was said to have penned his own eggnog recipe. The authorship is doubtful: Washington’s estate at Mount Vernon could find no record of an eggnog recipe. However, the recipe attributed to him is indeed a vintage recipe that included brandy, rye whiskey, rum, and sherry. Regardless of authorship, we don’t recommend trying this one at home!

Eggnog in the Present Day

While eggnog originated in the British Isles, it is still more popular in the United States to this day. In the American South, bourbon is often the liquor of choice for eggnog. The Puerto Rican equivalent of eggnog — coquitos — combines rum and coconut milk. A Mexican version adds cinnamon and vanilla to produce a sweet treat.

Though it's more convenient to purchase eggnog rather than make it yourself, be aware that the FDA only requires that 1% of a product's weight be made up of egg yolk solids for it to be deemed eggnog. And eggnog-flavored milk only requires 0.5% egg yolk solids. If you want to be sure you’re drinking authentic eggnog, your best bet is to make it at home. You can also whip up nonalcoholic eggnog so the whole family can join in — or politely decline.

While you’re passing the eggnog, pass on some knowledge.