Like an expensive face cream or tickets to a Billie Eilish concert, using trendy slang can help you pretend that you’re younger than you are. But if you were born before the year 2000 and you’re only sort of sure you know what yeet means, bad news: You have to give it back to the young people now. 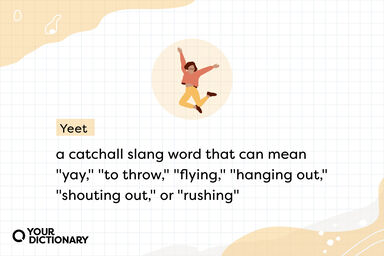 Yeet Means Nothing and Everything

“But I’m not old,” you’re complaining right now. “I wear skinny jeans and graduated high school in the 21st century. I say ‘yeet’ because I know exactly what it means.”

Do you, though? When you ask a young person to define yeet (and if you’ve ever owned a VHS tape, that doesn’t include you), they’ll probably just shrug because its meaning is so obvious, yet undefinable. However, if you’re not a member of this particular generation and insist on using yeet, you should at least know what it can mean.

You’re most likely to hear “Yeet!” when someone accomplishes something cool (and often while the person saying it is dabbing). Yeet originated in 2014 as a type of choreographed dance on Vine (remember Vine?) and has become a common exclamation for victory or celebrating something impressive, especially when something — or someone — flies through the air.

For example, one may say “yeet” when:

In short, yeet can mean the same thing as “boo yah.” And if you just nodded in understanding at that 90’s reference, you should probably stick to “boo yah” instead of yeet.

Besides hollering “Yeet!” when you throw something, the act of throwing the thing itself can be “yeeting.” For example:

You can also be the thing that’s being thrown (or “yeeted”) with a lot of force, similar to chuck. For example:

Yeet Can Mean Anything

“Okay,” you’re saying now. “I’ve got it. Just use ‘yeet’ when things are being thrown, or flying, or are cool.” Not exactly. Yeet can stand in for pretty much any word in the slang dictionary, including:

Yeet: The Word of a Generation (Not Yours)

So how do you know if you can use yeet without looking like the “cool mom” from Mean Girls? If you practice at least three of the following behaviors, you’re probably young and unironically cool enough to include yeet in your everyday lexicon.

We all get bummed about aging. But don’t worry — you’re still the bomb! (See? Doesn’t that feel better than yeet anyway?) If you’d like to learn just enough Gen Z slang to understand what those mom-jeans wearing kids down the street are saying about you, check out: