What the 'Stonks' Meme Is About and Where It Comes From

If you’ve ever made a questionable financial decision, you’re no different than 99% of the population. (That other 1% also makes bad money decisions, but they’re wealthy enough to cover up their mistakes). But what happens when you decide to post about said decision online — or worse, a financial advice forum? You’re getting the stonks meme. 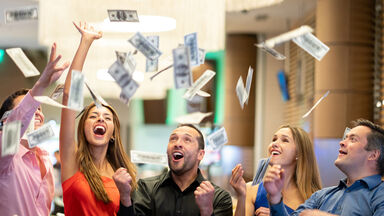 Group of friends throwing money in the air
Advertisement

Is ‘Stonks’ Even a Real Word?

Stonks isn’t a long-lost conjugation for “stink.” Popularized with the stonks meme that started in 2017 on 4chan, stonks is a purposeful misspelling of stocks and indicates that someone has no idea how finances work — so much so that they can’t even spell stocks (and think that every financial decision relates to stocks). It’s the meme equivalent of calling someone a genius when they’re actually being dumb.

The stonks meme pairs Meme Man, who appears in many popular meme images, with a rising orange arrow over generic stock prices, indicating that “stonk prices” are increasing. The meme enjoys spikes of popular usage, particularly during financial crises (such as the COVID-19 lockdown in 2020) when people are especially prone to bad money choices.

Think of stonks like sportsball for money. When someone doesn’t know much about sports, they may purposely misuse the word sports, as in “Did you catch the athlete sportsing in sportball last night?” It’s a way to make fun of yourself for not knowing something — and also annoy the people around you who really do know about sports (or money).

When to Drop the Stonks Meme

Everyone from Redditers to Elon Musk has dropped the stonks meme from time to time. Typically, you use it as a reply to a message board or social media post when someone reports a financial decision that sounds great now but can only end badly (think get-rich-quick schemes). You can also use it to be self-deprecating when you’re aware of your own lack of financial knowledge.

Feel free to add the stonks meme when someone:

More Meme-Related Slang You Should Know

Now that you’ve got stonks under your belt, how much do you know about dogecoin? Learn more about cryptocurrency and more online slang with: