Who Says 'Whomst,' and Is It Even Grammatically Correct?

Whomst is a popular meme that’s been making the rounds for the past few years. But is whomst a real word, and should you be using it unironically in real life? The short answer is no, whomst is not an actual word and will deeply confuse your grandma. However, grandmas aside, that doesn’t mean you can’t have fun with it! 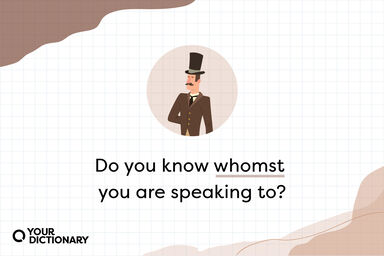 So what does whomst mean, and does it even matter if it’s not a real word? Simply put, it is an elevated/silly version of whom (the object form of who). Whomst is used ironically in situations where the person is pretending to sound formal or is making fun of someone for being a snob.

For times when you want to ask 'who or whom,' but need a fancier connotation. Ex: 'Francois dropped his caviar in the toilet. Whomst would do such a thing?!

How and When to Use Whomst

Whomst is only used ironically or in jest and is typically reserved for online spaces. There are many ways you can use the word in conversation.

Another even more outlandish form of this meme is whomst'd've. In the who to whom to whomst trajectory, whomst'd've is an even more elevated form of the meme that can be used to mean “did” or “have” if you want to sound extra fancy — or just confuse your friends.

No, that’s not a German or Welsh word. Just when you thought it couldn’t go any further, the internet delivers this meme word to rule them all. This is an extension of the already titanic form of whomst, whomst'd've'ly'yaint'nt'ed'ies's'y'es. These forms are not generally used beyond memes. However, if you ever want to stump a friend in a lawless game of Words with Friends, it’s a good word to keep in mind.

The Story Behind the Meme

To get to the bottom of the meme, we’ll have to head back to 2017. The whomst meme seems to have been created on January 21, 2017, by user p3pis and posted on Instagram. Before long, the meme was being shared across the internet, which explains the abrupt rise in popularity. The meme depicts a man getting happier the fancier the form of who gets, culminating in the comically complex whomst’d. As people began to share the meme, the use of whomst increased in general online usage among users, often outside the context of the meme.

Could Whomst Be a Real Word?

If you’ve grown attached to the made-up word whomst, there’s hope for you. Nearly 4,000 people have signed a petition to make whomst an official English word. If you too feel strongly about the official status of this meme, add your signature!

Now that you've established whomst is not an actual form of who, brush up on words that are and how to tell them apart.