How to Write a Strong Hypothesis in 6 Simple Steps

A hypothesis is an important part of the scientific method. It’s an idea or a proposal based on limited evidence. What comes next is the exciting part. The idea or proposal must be proven through facts, direct testing and evidence. Since the hypothesis acts as the foundation for future research, learn how to write a hypothesis through steps and examples. 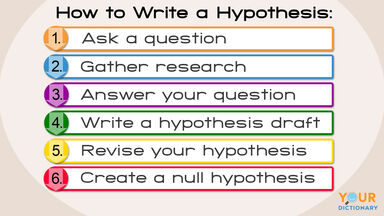 how to write a hypothesis directions
Advertisement

What Is a Hypothesis Statement?

A hypothesis statement tells the world what you predict will happen in research. One of the most important elements of a hypothesis is that it must be able to be tested. Sure, you might hypothesize that unicorn horns are made of white gold. But, if you can’t test the independent and dependent variables, your hypothesis will have to remain in your dreams.

If, however, you hypothesize that rose quartz and other crystals possess healing powers, then you might be able to perform a few tests and carry on with your hypothesis. You will have some evidence that either supports or does not support your hypothesis. Now that you know what it is, it’s time to learn how to write a hypothesis.

Steps for How to Write a Hypothesis

When it comes to writing a hypothesis, there are six basic steps:

In the scientific method, the first step is to ask a question. Frame this question using the classic six: who, what, where, when, why, or how. Sample questions might include:

You want the question to be specific and focused. It also needs to be researchable, of course. Once you know you can research your question from several angles, it’s time to start some preliminary research.

It’s time to collect data. This will come in the form of case studies and academic journals, as well as your own experiments and observations.

Remember, it’s important to explore your question from all sides. Don’t let conflicting research deter you. You might come upon many naysayers as you gather background information. That doesn’t invalidate your hypothesis. In fact, you can use their findings as potential rebuttals and frame your study in such a way as to address these concerns.

For example, if you are looking at the question: "How does sleep affect motivation?", you might find studies with conflicting research about eight hours vs. six hours of sleep. You can use these conflicting points to help to guide the creation of your hypothesis.

3. Formulate an Answer To Your Question

After completing all your research, think about how you will answer your question and defend your position. For example, say the question you posed was:

How does sleep affect motivation?

As you start to collect basic observations and information, you'll find that a lack of sleep creates a negative impact on learning. It decreases thought processes and makes it harder to learn anything new. Therefore, when you are tired, it's harder to learn and requires more effort. Since it is harder, you can be less motivated to do it. Additionally, you discover that there is a point where sleep affects functioning. You use this research to answer your question.

Getting less than eight hours of sleep makes it harder to learn anything new and make new memories. This makes learning harder so you are less likely to be motivated.

With the answer to your question at the ready, it’s time to formulate your hypothesis. To write a good hypothesis, it should include:

Remember that your hypothesis needs to be a statement, not a question. It’s an idea, proposal or prediction. For example, a research hypothesis is formatted in an if/then statement:

If a person gets less than eight hours of sleep, then they will be less motivated at work or school.

This statement shows you:

While you might be able to stop at writing your research hypothesis, some hypotheses might be a correlation study or studying the difference between two groups. In these instances, you want to state the relationship or difference you expect to find.

Getting less than eight hours of sleep has a negative impact on work or school motivation.

Those with seven or fewer hours of sleep are less motivated than those with eight or more to complete tasks.

Depending on your study, you may need to perform some statistical analysis on the data you collect. When forming your hypothesis statement using the scientific method, it’s important to know the difference between a null hypothesis vs. the alternative hypothesis, and how to create a null hypothesis.

Here are a few examples of good and bad hypotheses to get you started.

Tips for Writing a Hypothesis

To write a strong hypothesis, keep these important tips in mind.

How to Make a Hypothesis