Would you like students to participate in your adverb lessons eagerly or reluctantly? Grammar games are a wonderful way to make your instruction more engaging. Help students learn the types and functions of adverbs with these six interactive adverb games for the classroom. 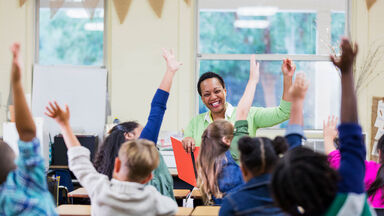 Adverbs can tell us how someone performs an action. That’s why an acting game is the perfect activity for an adverbs lesson! You need the following materials: index cards, strips of paper, a pencil, and two bags.

The point of the game is to guess what adverb the student is acting out. You can turn the activity into a team game for competitive fun, or give volunteers extra credit for the adverbs they act out.

Another great game to play with students is the No -ly Words Allowed game. This activity is a good way to discuss adverbs that are not adverbs of manner, such as adverbs of frequency or time.

If you are playing the game with only one student, use the same rules as above, and give him or her a prize when their list reaches twenty adverbs without -ly. You can make the game more challenging by prompting students to think of each type of adverb, or by only giving points to teams that have unique adverbs.

Adverbs can also tell you how often a verb occurs. Reinforce this adverb function with a game that quizzes panel members about how often they perform certain actions.

All you need for this game is one sentence on the board, a list of adverbs and a ball. It’s a great way to get the wiggles out and reinforce grammar at the same time.

If you’d like, you can change the action after every few students or when you run out of appropriate adverbs. Ask students for help thinking of new sentences.

If your students are creative and love to write stories, this is a great class activity. All they need is a little inspiration – and a lot of adverbs!

For younger learners or English as a second language learners, consider typing the story and printing it up. It might be easier for them to follow and offer additional reading practice as well.

Telling the difference between adverbs of place and prepositions is tricky at first. But once elementary students practice their parts of speech in a fun grammar game, they’ll know how to use adverbs everywhere!

You can make the game more complex by having teams hide the toys and describe each other’s locations. For an outdoor game, take a walk and compare objects being in a location versus actions being performed in a location.

Reviewing What an Adverb Is

An adverb is a part of speech that modifies a verb, an adjective, another adverb, a phrase, or a clause. Different adverbs answer questions such as how, when, where, how often, and how much. You can usually recognize the placement of an adverb in a sentence by the -ly ending on the particle of speech, but not always. Review the types of adverbs in a lesson on the parts of speech.

Adverbs are an effective way to make your writing clearer and more vivid. When used sparingly, they enhance the action in a sentence. Take a quick look at 100 adverbs that are sure to strengthen your writing. Or, if you’re ready for a challenge, check out these examples of adverb clauses that can make your writing style more varied.