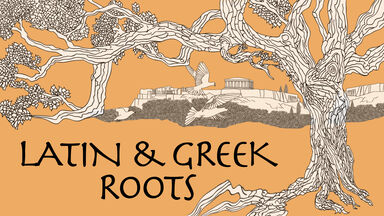 Learning Latin and Greek roots, prefixes, and suffixes is an excellent way to boost students’ vocabulary. Teaching these words explicitly can be effective, but not particularly interesting for learners who aren’t as interested in word meanings. Keep these strategies in mind for your next vocabulary lesson!

Print a blank bingo template and copy enough for everyone in the class. Project a list of common Greek and Latin roots on the board, and have students write down one word in random boxes in their template (with a free square in the middle). Call out definitions for the words; for example, if students have written the word “pre,” call out “before.” First one to get five in a row is the winner!

Split the class into two groups and have one “batter” from each team come up to the board. “Pitch” them a root word; the first student to raise their hand calls the English definition (first base), an example word (second base), a definition of the example word (third base), and an antonym for the root word (home run!) Keep score on the board and have students either stand on classroom bases or indicate how many runners have on each base on the board.

Encourage students to keep a vocabulary journal. At the beginning of the week, list five common roots for them to look out for. Every time they see these roots in their independent or class reading, have them write down the word and its definition in their journal. Students who have found examples of each word score points, as well as students who found multiple examples of one or two words.

Place large versions of selected Greek and Latin roots on a bulletin board. As they appear in vocabulary lists, add relevant words in smaller fonts next to the appropriate roots. Students can also add words that they find or think of on the board as well. Keep the wall up all year to create a collection of vocabulary words!

The Influence of Latin Today

The English language has borrowed bits and pieces from many other languages, but Latin remains among the most influential. In fact, some studies have estimated that almost half the words we use in our daily conversation have Latin roots.

There are two main reasons for the prominence of Latin within modern English vocabulary:

There are a number of examples of Latin's influence in current English spellings. For example, our legal system includes many Latin terms and expressions. Latin contains some of the most beautiful words in any language as well.

Since Latin is not commonly taught in schools today, finding accurate information about this ancient language can be a challenging task. The following reference books may also be useful for assisting in your study of Latin word roots:

Latin and Greek Roots in the Classroom

Learning Latin and Greek roots is an important step in improving students’ vocabulary. Once they recognize common root and base words, prefixes, and suffixes, they can understand more words upon reading them for the first time. For more classroom instruction ideas, check out an article with opportunities to practice Latin and Greek roots in context. You can also read up on how base words and root words are similar – and also different.