Having word lists available while playing charades will reduce the time it takes for kids to think of topics on their own and you can make sure the list is tailored to the age of the children. You can either give the children a list of items, words or phrases or help them brainstorm categories and words before they begin playing. 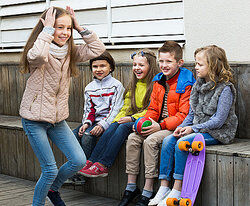 When making a word list for charades, it is best to think of some broad categories or themes and fill in age-appropriate words from there. Kids of all ages can enjoy a fun game of charades, but younger children might get frustrated if the words are too hard. The following categories contain lists of words that are ideal to use as inspiration for all age groups.

Making a list of words or phrases that reflect a specific activity is not only fun, but can also be simple for younger kids to act out. The following are some examples of activities that work well for charades:

Books are a good route to go down when making a charades word list for children. Just make sure that the title is easy to act out for the age group and the book is well-known among the children. Some ideas to consider for book titles are:

Depending on the age of children, adding in a list of famous figures, dead or alive, can make the game a little more interesting. The following are some famous people to consider:

Adding some famous places to your charade list can take the game to the next level. This category is definitely more suitable for older children. Some locations to include are:

Children of all ages can enjoy acting out a favorite food. Foods that are easy to demonstrate by eating a certain way are great to add to the list. Some ideas of foods to include in your word list are:

Movie titles are another fun idea to consider for charades. Kids of all ages can enjoy acting out the title to a favorite or well-known movie. Some examples to consider are:

Kids are sure to have a blast acting out a favorite song or pretending to be a singer. The following are some ideas to consider for songs and singers:

An easy category for kids of all ages is sports. If you want to make it more challenging add in some famous athletes:

Kids can have fun acting out a favorite TV show or character. Make sure you use a list of shows that are known by most kids and are not difficult to act out. Some ideas include:

Before playing, giving each child the chance to write down ideas for each category (movies, television, books, music, etc.) will get them excited for the game. Another benefit to having younger children brainstorm the word list is that they will more easily remember the words. Remember to keep the charades ones that are fairly easy to act out and are well known. Anything too unusual will be difficult to act out and guess and the kids might become bored or frustrated.

Once you get a good list of words, playing the game is quite simple. Divide into teams to make it more competitive, or just take turns. One person picks a word or phrase (from those you just wrote down) to act out and the other players guess what they are acting.

As you can't speak, there are actions to mime that will give some clues. If the word or phrase is a book, put your hands together and unfold them like opening a book. To indicate a person, stand up with your hands on your hips. For a song, pretend to sing. For a movie, turn you hand in front of your face like operating an old-fashioned camera. For a TV show, draw a rectangle with your fingers. If it's a phrase hold up fingers to show the number of words. Put your finger and thumb close together to indicate a small word like "a" or "the;" move them far apart for a very long word. Touch you ear to indicate the word sounds like another, easier-to-act-out word.

Some examples of some easy charades to act out are:

Move on to harder lists of charades clues for older kids or adults with our challenging charades word lists. You can also get into the holiday spirit with our Christmas charades ideas including a printable word list.

Once you've had your fill of charades, have more word fun using our hard, but fun, hangman word lists or pictionary words for all ages.