Many older students groan when it comes to grammar practice. But grammar doesn’t have to be boring! Playing grammar games is a perfect way to master skills without falling asleep. 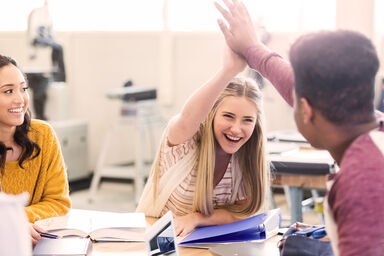 If you’re working on parts of speech, playing Grammar Trade helps to reinforce the concept while building writing (and commerce) skills. All you need for this game is index cards.

High schoolers who struggle with prefixes may enjoy an interactive prefix game. For this game, you’ll need both pages of the printable below, some scissors, and a timer.

For English learners or struggling readers:

For mainstream students or advanced learners:

SWAT is a fun classroom game that reinforces any grammar concept. To play, divide your students into two teams. Also, you need a whiteboard and markers. The game is most fun with a flyswatter, but students can also use their hands.

For this game, you’ll need two dice, the printable and a timer. You’ll split the class up into two teams. Each team will roll one die.

Use Sentence War to review parts of speech or help high schoolers who are having trouble with grammar or spelling. To play, you’ll split your class into two groups.

The team to complete the task first or most successfully wins. Use your discretion for teams that both did equally well.

Before playing Grammar Jeopardy, create a jeopardy game with sections like “Place That Comma” or “Commonly Confused Words.” Write questions for each section and assign them a dollar value from $100 to $500. If you have a jeopardy template, you can adapt it to grammar concepts (or find a template available online). In a pinch, you can create a template using paper and a whiteboard.