There are many grammar games that teachers can use in their classroom to reinforce learning and build vocabulary. They're a great way to expand the learning experience beyond more typical lesson plans, making the process much more fun for students of all ages. Following are explanations of three great grammar games for kids. 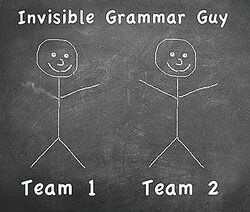 This game is good practice for adjectives. Divide the class into two teams and each team takes turns answering. Tell them they are to use an adjective to describe grandmother’s cat, starting with the letter A. The other team then has to provide an adjective starting with the letter B, and so on going through the rest of the alphabet. There needs to be a time limit for each response.

The game continues until you reach Z or until all players on one team are eliminated. Alternatively, the game can cycle through the whole alphabet again, being sure not to repeat any of the adjectives that were already used.

Another version has the class divided into small teams and they work together to make a complete list. You can choose to leave out certain letters, like Q and X, if you feel that it would be too difficult or impossible to come up with an adjective for that letter. You can give a small prize or special privilege to the teams who complete the list.

This grammar game is more visual in its approach. The steps are easy to follow, even for the youngest of learners. You'll need to start with a list of words for this game, and that list can come from anywhere. Just make sure it is suitable for the age group. Spooky words could be perfect for Halloween, for example.

The same fundamental framework can be applied to many different aspects of grammar too. You could read a word aloud and the player needs to name the part of speech. Or you could ask the student to conjugate irregular verbs.

Sometimes also known by its generic name 4 in a Row, Connect Four is a wildly popular game that has been around for decades. You can usually find one at thrift stores or online for $20 or less.

As you might recall, the objective is to form a line of four discs of the same color, either vertically, horizontally, or diagonally. The discs are dropped from the top and fall to the bottom of the corresponding column. Introducing the grammar element is easy.

Your Turn to Play

While more traditional lessons and worksheets, like those used to learn quotation marks or to practice subject-verb agreement, will also serve a role, it's fun to mix things up with some grammar games every now and then too. Kids learn best when they're having a good time, and these games introduce a whole new dynamic to the classroom.