How to Solve Cryptograms

Learning how to solve cryptograms is a fairly straightforward process. 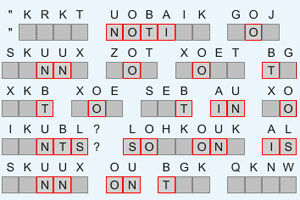 Mystery of a Cryptogram

Solving cryptograms is one of the more popular word games. Most cryptograms are simply encoded with single-transposition keys, where one letter is substituted for another. This seems to create complete gibberish on a screen, such as:

However, there are actually very clear and deliberate ways to figure out exactly what letters are substituted and the meaning of the cryptogram. The key, so to speak, is to look at some of the conventions of the English language and play a game of percentages and educated guesses.

The first step is to realize that the most common letters in the English language are E, T, A, O, and N, with I and S a close second. So, the first step to solving the puzzle is to look at what letters occur most often in the above gibberish, and work with them.

M, R, and S appear three or four times each. Now, you can begin the process of trial and error by substituting the popular letters for the common ones. Simply replacing the letters and looking for patterns that remind you of common English words is a way to start.

This is especially effective for short words that have only two or three letters.

Other conventions of the English language can also provide clues. Only a few letters are actually ever repeated twice in a word: RR, LL, NN, MM, and fewer of these are in small words. So if there is a three-letter word containing repeating letter, such as SZZ, that word is almost certainly the word ALL. Another very common pattern is the letters TH – appearing in both THE and THAT, as well as THIS, THOSE, THEM, and more.

To give another hint, in the above cryptogram the first word is "THIS." The technical term for two-letter combinations that commonly appear in the English language is digraphs. The most common digraphs are TH, HE, AN, IN, ER, RE, ES, ON, EA, and TI (this last is especially useful in discovering the common four-letter word ending –TION).

Knowing that gives a very powerful tool in figuring out the rest of the words. Since the first word is "THIS," and the letter combination YG (which you now know is TH) doesn't appear at the beginning of any other words, you know that none of them are words with TH at the beginning.

Go for the Unusual

Knowing what the words can't be is sometimes as useful as knowing what they can be. Also, knowing unusual words, such as those that begin with X can give you a great advantage in solving cryptograms.

Other conventions of cryptographic puzzles are also useful to know. Sometimes, for example, they try to throw in non-transposed letters, so that ALL would be encoded GLL and a person spends forever trying to figure out what the letter L represents (the answer being itself).

Many cryptographic phrases begin with phrases like "The best…" or "Some of the…" or "The only…" and knowing that can give you a few options to try right away.

Look for the Pattern

It all comes down to making systematic educated guesses until the pattern emerges. Usually, after the vowels are figured out there is an acceleration as the phrase becomes clear. One frustrating problem can be a cryptogram with errors in it, whether grammatical, spelling, or an encoding error – however, that can be looked on as just another bit of the puzzle to figure out, above and beyond the basic cryptographic algorithm.

Using these step by step processes, you can figure out that the puzzle at the beginning of the article uses the following substitution cipher:

Which, translated, reads: "This is how anyone can learn how to solve cryptograms."