A modifier is a word or participial phrase that provides more information about something being discussed in the sentence. Sometimes, modifiers can get lost or misplaced in a sentence. When this happens, things can get very confusing! Keep reading for examples of this common grammatical error, as well as a helpful misplaced and dangling modifiers worksheet for extra practice. 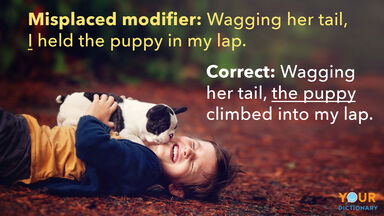 Examples of Misplaced or Dangling Modifiers

Misplaced and dangling modifiers may be confusing, but they’re easy to fix. The trick is knowing which type of modifier you’re dealing with. That depends on the noun that you’re modifying and how close it is to its modifier.

A misplaced modifier is a modifier that is in the wrong place. As a result, it appears to modify the wrong noun.

1. Always eager for cake, the birthday party was attended by everyone.

2. Water from the sprinklers started to rust the brand-new child’s bike.

3. Driving to the party, the present rattled around in the trunk.

4. Forgetting that the microphone was on, the whole audience heard the singer's fight with his wife.

5. Wagging her tail, the puppy climbed into my lap.

This misplaced and dangling modifiers worksheet features 10 identification questions similar to the exercise above. It also has a section for writing corrected version of these sentences.

How did you do on the five practice questions? Check your answers below.

2. (M) Brand-new should modify bike, not child.
Corrected: Water from the sprinklers started to rust the child’s brand-new bike.

3. (D) The present is not driving.
Corrected: Driving to the party, we heard the present rattling around in the trunk.

5. (C) This is correct. The puppy was the one wagging her tail.

Cleaning Up Your Writing

Checking for misplaced and dangling modifiers is a great start to making writing understandable. If you’d like more ways to clarify your communication, learn when you should eliminate passive voice in your writing. You can also check out a quick slideshow that provides tips for cleaning up your vocabulary and word choice.