Prepositions are one of the eight major parts of speech. They are a fairly important part of speech, as they help to determine the relationship between all of the other words in a sentence. Prepositions are often referred to as relationship word or direction words, since they dictate how the nouns, pronouns and phrases relate to each other or together in a sentence. Without prepositions, it would be very difficult to communicate meaning. For example, a sentence that says, "the book is the table" has very little meaning; but, a sentence that says "the book is on the table" suddenly makes a lot more sense with the addition of the word "on." A great way to teach prepositions is with the use of games. 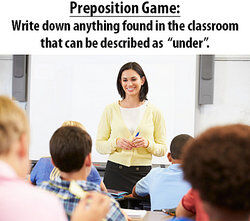 Teaching prepositions can be both fun and easy with the help of some simple preposition games.

The first preposition game can simply involve helping students to brainstorm as many prepositions that they can think of. There are over 100 different prepositions in the English language; so, students can have a lot of fun with this game and can play for a long time.

Simply define a preposition for students, and then ask them to list as many as they can. You can have them write their lists on a piece of paper and the student who has the most prepositions wins the game.

Alternatively, you can have them go around the room and each student must come up with a new preposition. As the students list the prepositions, you can write them up on the board or on poster board that can be hung up and referred back to later.

Once children have made a long list of prepositions, you can then do a preposition scavenger hunt.

Have one student step out of the room for a moment and hide something in the classroom, such as a piece of candy or some other desirable object. When the student returns, the other students can direct him to the hidden object using only prepositions.

Once students have gotten comfortable using prepositions, have them try to recognize prepositions in the context of sentences or books.

You can make this a bit easier by telling them just how many prepositions are found within the context of the book; or, if you want to make the game a bit more challenging, you can just let them keep looking until they think they have found them all.

Once students have a general idea about prepositions and can use them in basic sentences, you can take the lessons and activities a step further by explaining the relationship between idiomatic rules and prepositions.

To help ensure that all of your students have a good grasp of the correct preposition to use according to idiomatic rules, you can:

Challenge the students to find all of the words that violate idiomatic rules by using the wrong preposition after the word.