But seriously, Shakespeare has topped the English literature bestseller lists for 400 years for good reason. He may be as out of date as your uncle’s second favorite pair of tights, but besides being fun, learning to talk like Shakespeare will teach you about how the English language works. 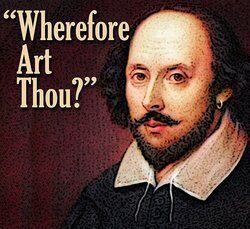 Shakespearean Words Still in Use

The nice thing about talking like Shakespeare is that you probably already do. Shakespeare's work is so old, and so persistently popular, that his plays and poems have shaped the English language as a whole. Here are a few fun phrases we still use today:

We could go on. In fact, we did. For more Shakespearean goodness, check out our List of Words and Phrases Shakespeare Invented.

Like any writer, Shakespeare had favorite words and phrases that appear repeatedly in his work. He also used several out-of-date constructions for common modern words. Here is a by-no-means-exhaustive glossary that will help you sound like a Shakespearean character:

For all that he’s a big influence on a surprising number of modern phrases, Shakespeare’s been dead for over 400 years. Shockingly, some stuff has in fact fallen out of fashion.

The first thing to know about Shakespeare is that, for all that it doesn’t usually rhyme, he was writing poetry. His plays are in blank verse, which is to say, they don’t follow a rhyme scheme but do follow a poetic meter, specifically iambic pentameter.

If that’s all Greek to you (good eye; both those words originate from Greek), don’t worry. Poetic meter is just a pattern of which syllables you emphasize and how many you write per line. Iambic pentameter means that each line contains five (“penta”) iambs, and each iamb consists of one unstressed syllable followed by a stressed syllable:

A number of Shakespeare’s signature oddities come from trying to fit the pattern of iambic pentameter. His love of weird contractions - “do’t,” “is’t,” and so on - starts with trying to squeeze two words into one syllable. He cheats sometimes too, as with the sneaky unstressed syllable at the end of the Hamlet quote above. That sneaky unstressed syllable is called a feminine ending.

Feminine endings turn up all the time in Shakespeare; up to 10 percent of his lines sneak in an extra unstressed syllable at the end. The Bard didn’t hesitate to play fast and loose with his own rules. Don’t hesitate to do the same.

Inject Some Shakespeare into Your Games

Looking for an unusual party game? Consider working some Shakespearean spice into your favorite activities.

Make up your own games -- the ideas are endless.

The official Talk Like Shakespeare Day is April 23 each year. Nobody knows for sure when Shakespeare was born - it was kind of a while ago; the only official record is of his christening on the 26th - but April 23rd is his generally accepted birthday. On the official site, you’ll find tips about how to blog, tweet, and talk like William Shakespeare.

Haven’t had enough? Excellent! For more of Shakespeare’s verbal flourishes, have a look at our Shakespearean Translator. As Robert Graves famously said, “The remarkable thing about Shakespeare is that he is really very good - in spite of all the people who say he is very good.” Quite right, forsooth.