From agonizing over classroom worksheets to slacking off with modern word-games-turned-daily-obsessions, we’ve all stared at our fair share of word jumbles. This type of word puzzle gives you a bunch of mixed-up letters and asks you to unscramble them to make a real word. In some cases, there are multiple answers possible, but in others, you’ve got to track down that one word that includes all the scrambled letters. Let us help you become the ultimate word sleuth with some tips on solving any word jumble. 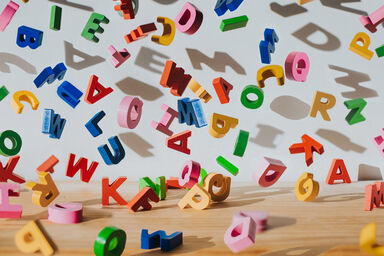 Use a Jumble Solver (No — it’s not cheating!)

If you’re seriously just looking for the quickest and most efficient way to unscramble a word jumble, an automated tool is your best bet. The trick is, you’ve got to find the best jumble solver! WordFinder by YourDictionary has one of the best (we might be biased) with their Word Scramble tool. You simply enter up to 20 letters, set your parameters (starts with, contains, etc.), and within seconds you’ll have a list of possible answers. Let the algorithms do all the work, while you claim all the glory.

Some letters in the English language like to stick together, while others are rarely seen near each other. Your first step in solving a word jumble the old-fashioned way is to look for these letter friends and enemies.

Check out our lists of consonant blends and diphthongs for more on which letters like to stay close.

Spotting prefixes and suffixes, collectively known as affixes, could also help you unscramble your letters quickly. Prefixes like re-, de- or anti- might be easy to spot, and you’ll know they form the start of the word. Suffixes like -ed, -er, -es, or -ing give away the word’s ending.

Separate the Consonants and Vowels

Write the consonants out in a grouping together, then do the same for the vowels. Look at each group independently to better see possible letter pairings. Looking at the letters “b,” “l” and “t” next to each other will help you see that “b” and “l” could be next to each other in a word, but “b” and “t” are less likely (but hardly impossible — debt or doubt, anyone?).

Move the Letters Around

Whether you use Scrabble tiles, your kids’ refrigerator magnets or simply a pen and paper, sometimes a tactile approach is the answer.

If your letters are presented in a standard horizontal line, consider forming them in a circle like the numbers on a clock. Seeing the letters in different ways helps you spot more possibilities.

If your word jumble is the kind where you have to use all the letters and only use each letter once in the same word, it can help to just start with what you see. If win is the first word that jumps out at you, don’t jump for joy just yet. Consider this a starting point by asking yourself, “Could any of the other letters be added to win to make a new word?”. Add that “e” to the end, and you’ve got wine. Throw the “s” on the front, and you’ve made swine.

Don’t Let Your Brain Get Jumbled

While it might be tempting to just stare at your scrambled letters until a word materializes, there are quicker and easier ways to solve word jumbles. Put these tips to the test by trying out a couple of easy word jumbles: