Cultural anthropology is the study of how humans form and maintain a culture. It examines how people’s beliefs and ways of life determine how they organize a society. Before you can truly delve into the field, read through these cultural anthropology terms to better acquaint yourself with this branch of anthropology. 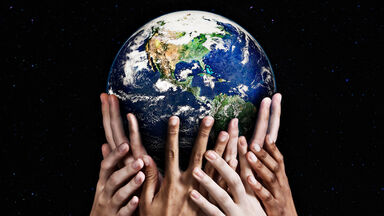 Every person is born into a native culture. But unless they only interact with other members of that culture, they are likely to encounter characteristics of multiple cultures throughout their lifetime. Check out these terms that describe one’s relationship with their own culture and other cultures:

Much of cultural anthropology revolves around how societies work. Anthropologists learn a lot from studying a society’s power structure and norms. Explore some key concepts that relate to society and social organization.

The way humans behave in a society is set by social norms. This behavior can include the way people interact with each other, communicate, and perceive their own actions. Browse some examples of behavioral and communication terms from cultural anthropology.

When examined on a smaller scale, almost every culture is made up of families. Kinship describes the relationship between individuals within a family system. Keep these terms in mind when studying family and kinship in cultural anthropology.

A culture’s treatment of race and ethnicity can be very informative to its anthropology. If you’ve ever gotten ethnography and ethnology mixed up, you might want to take a look at these important terms.

Cultures maintain their own norms and expectations with structured legislation. These political and legal systems not only keep the social system running, they reinforce these norms to the society as a whole. Discover important political and legal terms in cultural anthropology.

How does a culture distribute its good and services? Does it value reciprocity? See how much you can tell about a culture’s values by learning more about its economy with these economic terms.

Laws and economic structures may demonstrate a culture’s ethics, but nothing explicitly states cultural values like its connection to the spiritual world. Here are some important terms to know when studying a culture’s religion and ideology.

Whether you’re a budding ethnographer or a beginning anthropology student, it’s important to know key anthropological terms that describe the field’s methodology. Here are some key concepts that you’ll need to know before embarking on your first ethnographic study.

The Importance of Cultural Traditions

Cultural anthropology is an important, informative, and interesting discipline that will take you on a journey to practices and traditions of the past. Students of cultural anthropologists study the significance of all aspects of a particular culture, including cultural traditions and folklore. Take a look at different types of folklore around the world with several examples.