10 Words That Don't Mean What You Think They Mean

The English language is always evolving. Over time, the way that people use a word can change, leading to words that don't mean what you think they mean. Whether this change is the result of a common usage error or has been deemed acceptable by official dictionary writers, it's often surprising to learn the real — or at least the original — meaning of some words. So are you sure you're using that word correctly? Here are 10 words that might not mean what you think they mean. 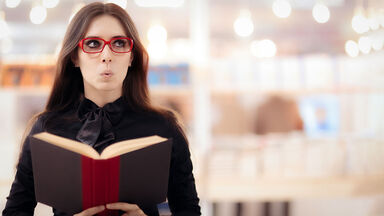 If you think this word means the same thing as a word it rhymes with, you're absolutely right. Unfortunately, most people choose the wrong rhyme. "Bemused" doesn't mean "amused," though it's often used that way by mistake. It actually means "confused." If you have a bemused expression on your face right now, it's because this new information is blowing your mind — not because you think it's hilarious.

You're probably not totally wrong about what "decimate" means, but the common error people tend to make with this word is a matter of degrees. The term does mean to destroy or eliminate something — but not completely. As the prefix deci- suggests, it actually means to reduce something by only one-tenth. So if your retirement portfolio was decimated by the Great Recession, you actually got off easy, losing only 10 percent of your money. If you lost a lot more, use a different word or phrase, such as "nearly wiped out" or "destroyed."

Someone might say, "I'm not going to watch the Super Bowl. I'm totally disinterested." They probably mean they don't like football, but what they're actually saying is totally different. "Uninterested" is the word that means you find something boring. "Disinterested" means you don't have any stake in the outcome because you're not invested in it. Now, if your friend meant they weren't going to be betting or gambling on the Super Bowl, then "disinterested" would be the correct term to use. There's a small but important distinction between disinterested and uninterested.

Have you ever accidentally stuck your finger in an electrical outlet and gotten electrocuted? Chances are that you probably actually just got "shocked." The word "electrocute" means to kill or severely injure someone with an electric shock. If you get a nasty shock from a malfunctioning appliance, it was probably quite unpleasant. However, unless you had to be hospitalized or were killed (in which case you would not be reading this), you haven't been electrocuted. Instead, you were "shocked."

"Factoid" is a relatively new word in English. It was coined by author Norman Mailer in 1973. He meant it to refer to tidbits of information that everyone thinks are true but actually aren't. According to this original use, "factoids" aren't facts at all, but rather fake news that people believe just because they've heard it or have seen it written somewhere, such as in tabloids or on Twitter. The irony is that today people use factoid to mean a fun trivia fact. This, of course, is pretty much the opposite of what Mailer intended the term to mean.

Speaking of irony, isn't it ironic that people use this word incorrectly all the time? Nope. It's just funny. That's not what irony is. Sometimes people misuse "ironic" to mean an interesting coincidence. Irony is really when the opposite of what you expected happens. It can also refer to saying something unexpected, like a sarcastic comment of "good job" when a server drops a tray of glasses.

If you think "lied" has two meanings, you're in for a surprise. The term "lied" is the past tense of only one word, not two, so you could be using it correctly only half the time. If you lied to your mother yesterday, you may not be an honest person, but you used the word correctly. "Lied" means to have told an untruth in the past. It is not the past tense of "to lie down" — that would be "laid." Many people get these conjugations confused. It's correct to say "I laid down after work yesterday because I was so tired." The word "lied" cannot correctly be used in this context. Fortunately, there are easy ways to differentiate lay vs. lie.

It may be tempting to blame this one on Rob Lowe's performance on Parks and Recreation, but the reality is that his Chris Traeger character was poking fun at the many people who are confused by the word "literally." The term "literally" means something that's real, true or exact. Most people use this word to mean the opposite, though, saying things like "My head literally exploded." If that were true, you'd have a real mess on your hands! You also wouldn't be talking. This type of usage has become so common that dictionary bigwigs have added the figurative use of literally as a usage option. Go figure.

"Luxuriant" sounds like "luxurious," but it's not quite the same. "Luxuriant" means “abundant." Something does not necessarily have to be expensive, plush or decadent in order to be luxuriant, but that is the case with things that are luxurious. You can have a luxuriant lawn that's lush with green grass. You won't find that luxuriant lawn to be luxurious if you're the one in charge of all the mowing, fertilizing and weeding.

The word "penultimate" means second to last, usually on a list of items or in a series of books. That's because "ultimate" actually means the last item, not necessarily the best one. Over time, however, people started to use "ultimate" to mean the best or most exciting thing around. While that shift became so common that it's now accepted, it also means that people began to use "penultimate" to mean extra-awesome — which isn't correct at all. The prefix pen- means "almost," so using "penultimate" to mean "really great" doesn't even make sense. Alas, the road to changing definitions never did run smoothly.

Making Sense of Words That Don't Mean What You Think

Did any of these definitions "literally" blow your mind? Let's hope not! Since English is the language that probably has more words than any other, there's a lot to keep track of. So, you're excused if you get three or four or even ten (or more!) words mixed up once in a while. Now that you know some of the many words that don't mean what you think in the English language, you can focus on making sure that your speech and writing are truly top-notch. Expand your language arts skills by reviewing a selection of words with multiple meanings. Then, keep building your vocabulary by exploring some powerful words of wisdom to keep you inspired!