The 11 Rules of Grammar: Understand the Basics

It seems like English grammar has about a million rules to learn. Between subject-verb agreement, Oxford commas, and active vs. passive voice, it’s easy to get lost in the grammar shuffle. But there aren’t actually a million grammar rules — in fact, if you master just these few, you can avoid common grammar mistakes. 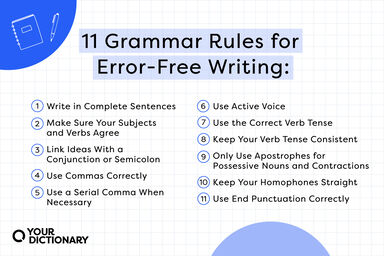 list of the 11 rules of grammar from the article
Advertisement

Every sentence needs two parts to be complete.

Depending on the verb, a complete sentence — also known as an independent clause — might also have a direct object (Katie plays the violin). If your sentence is missing a subject or a verb, it’s a sentence fragment.

2. Make Sure Your Subjects and Verbs Agree

You may not expect to find disagreement in a sentence about kittens, but the sentence “My kittens wants food” is definitely having an argument with itself. The subject (kittens) is plural, but the verb (wants) is singular.

3. Link Ideas With a Conjunction or Semicolon

Although writing in simple sentences is grammatically correct, it’s not very interesting. Combine your simple sentences with coordinating conjunctions (for, and, nor, but, or, yet, so) to make compound sentences.

You can also mix it up by using a semicolon instead of a conjunction.

5. Use a Serial Comma When Necessary

When listing items in a sentence, you separate them with commas. The last comma in the series is called the Oxford comma, and not everyone likes it.

Sentences in active voice put the subject before the verb. For example, in the active sentence “The duck ate the bread,” the duck is the subject. It performs the action in the verb (ate) to the object in the sentence (the bread).

In these examples, the subjects are bold, the verbs are underlined, and the objects are italicized.

7. Use the Correct Verb Tense

Using a verb tense that doesn’t match your time period is like stepping into a broken time machine. When did the action happen — today, tomorrow, or one hundred years ago? Is it still happening?

Make sure that you’ve got the correct tense for the time period you’re describing.

When talking about a continuous action, you can use present, past, or future progressive tense (with -ing verb endings). If you’re talking about something that happened across a span of time, use perfect verb tenses (with the modal verb have or had).

Another part of using the correct verb tense concerns consistency. If you start your sentence (or paragraph, or page, or book) in one tense, you need to make sure the rest of your writing is also in that tense. You can go back and forth if you’re talking about different time periods, but be careful not to mix them up.

9. Only Use Apostrophes for Possessive Nouns and Contractions

Many people use apostrophes in plural nouns because — well, we’re not sure why. Apostrophes note when letters are missing in a contraction and they indicate a singular or plural noun’s possession. Those are the only jobs of an apostrophe.

The rare time you’d use an apostrophe to show plurals is for plural lowercase letters (as in “Mind your p’s and q’s”). Otherwise, keep them away from your plural nouns.

Using too when you mean to is a common — and avoidable — mistake. Make sure you know the difference between common homophones to keep your meaning clear.

These aren’t the only commonly confused words in English. Find the ones that confuse you the most and learn how to tell them apart.

All good things must come to an end, and that includes your sentence. Be sure that you’re using the correct end punctuation mark for your sentence for the tone you want.

If your sentence ends in a quote or dialogue, put your end punctuation (also called terminal punctuation) inside the quotation marks as well.

Keep Calm and Grammar On

That’s it — you’ve mastered grammar! Well, pretty much. If you’d like to fine-tune a few more grammar rules, check out: