Understanding the 18 most common grammar mistakes can help you improve your writing. When you know which common grammatical errors to look for, it's easier to act as your own proofreader and editor. 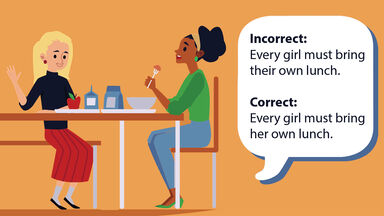 Incorrect sentence: “Rachel is very smart, she began reading when she was three years old.”

Pronoun errors are common in modern English, as writers try to avoid awkward phrasing or the implication of sexist language. Although this is an admirable goal, it is still important to learn the correct grammar and use it in more formal situations.

Apostrophes are used to show possession. However, you do not use an apostrophe after a possessive pronoun such as my, mine, our, ours, his, hers, its, their, or theirs.

In the case of it's, the apostrophe is used only to indicate a contraction for “it is.”

To clearly communicate your ideas, you should place a modifier directly next to the word it is supposed to modify. The modifier should clearly refer to a specific word in the sentence. Misplaced modifiers can create confusion and ambiguity.

Sentence fragments are also common grammar mistakes. A sentence needs to have a subject and a verb. A fragment often happens after another related idea has been expressed.

7. Missing Comma in a Compound Sentence

A compound sentence expresses two complete and related ideas, and it usually includes a conjunction to connect these two parts. There should be a comma before the conjunction to indicate the two ideas are related. If that’s missing, it’s a mistake readers will notice.

An antecedent is a word that comes before a pronoun and helps the reader understand what the pronoun means. Generally, you can clear up this confusion by rearranging the wording.

9. Ending a Sentence in a Preposition

Another common grammar mistake is ending a sentence with a preposition. A preposition, by its nature, indicates that another word will follow it. In casual conversation, this type of error is no big deal, but you should avoid this mistake in your writing.

There are words that sound the same but have different spellings and meanings. If you mix these up, it can be an embarrassing mistake. These are a few of the most commonly confused words:

Sometimes, it’s not a matter of mixing up the spelling as much as an error in word choice. There are many words that sound similar but have different meanings and spellings. These include the following:

While commas are important for clarity and give the reader a chance to pause in the sentence, it’s possible to use commas when you don’t need them. These unnecessary commas can be confusing to read, and they make writing look less professional. Before you use a comma, think about why you’re using it. If you aren’t sure it’s needed, double-check by reviewing comma rules.

13. Mixing Up Possessives and Plurals

People often get confused when adding an “s” to the end of a word. When do you need an apostrophe? In general, you use an apostrophe before an “s” to show possession or as a contraction, like “that’s” for “that is.” If you’re just trying to say something is plural, you don’t need the apostrophe. Like most rules in the English language, this has some variation. However, if you keep the general guidelines in mind, you’ll be correct most of the time.

14. Mistakes With Well and Good

One of the most common grammatical errors is mixing up “well” and “good.” In general, “well” is an adverb, while “good” is an adjective. When you aren’t sure which one to use, simply ask yourself whether an adjective or an adverb is appropriate for the situation.

15. Comparisons That Are Incomplete

When you use a word that has a comparative aspect, you need to compare it to something else. These common grammatical errors may appear in advertisements or market slogans, but it does not work well in papers or other writing. If the word requires a comparison, you should always provide it.

16. Mixing Up Adverbs and Adjectives

If you mix up adverbs and adjectives, this can be an embarrassing grammar mistake. This is the kind of error that can annoy a teacher or make the difference between a great grade on an essay and getting marked down. This happens most often with words that end in “-ly.”

17. Confusion Between Fewer and Less

Knowing when to capitalize the words in a title can be very confusing. In general, you should capitalize the first and last words, all nouns and pronouns, all verbs, and all adjectives and adverbs. However, there are specific title capitalization rules depending on the style you are using.

YourDictionary has an extensive listing of links of grammar rules and tips. Taking advantage of easy-to-understand lessons and examples can help you polish your grammatical skills while working at a time that best fits your busy schedule. If English is not your native language, there are also links on YourDictionary to resources that explain the most common grammatical mistakes for ESL students.