Everyday Tips for Using Active Voice in Your Writing 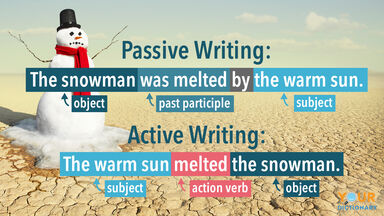 melting snowman with examples of passive and active sentences
Advertisement

Identify the Action and Subject in the Sentence

What's happening in the sentence? Finding a sentence's main verb is the first step to determining whether you're using active writing. For example, the main verbs are bolded in the following sentences:

You'll often find that the object, not the subject, is the first noun in passive writing. One way to change a passive sentence to an active one is to flip the sentence around so it's clear who is performing the action. For example, in the following sentences, the bolded subject is last in the passive sentences but first in the active sentences. The italicized object also switches positions.

Notice that when you use active writing, you reduce the number of words in the sentence. This includes passive linking verbs that don't need to be there.

Make Sure There Is a Subject

Because sentences in the passive voice often start with an object, it's easy to forget about the subject entirely. You often find this problem when a sentence includes modal verbs, such as "should," "can" or "will." For example:

Leaving the subject out may be a purposeful use of passive voice, such as when the subject is unknown or doesn't matter to the action. But if your sentence doesn't fall into these instances, it's best to make sure you have a subject.

Overly complicated sentences with additional helping verbs slow the reader down. You're most likely to find forms of "to be" (is, are, was, were) in passive voice. For example:

Adding these linking verbs makes the main verbs of the sentences into past participles, which is confusing when the sentence is actually in the present tense. When you remove the linking verb and put the subject in the right place, they are now in the active voice.

Be Careful With 'By' as an Adverb

Some words, such as "by," function as both prepositions and adverbs. For example:

Both uses are grammatically correct. However, "by" as an adverb often shows up in passive sentences to improperly connect a subject with its verb. For example, in these passive sentences, the subject is italicized and "by" is bolded.

Removing "by" from these sentences and reordering them makes them so much easier to understand. Once you get used to active writing, you'll find that active voice really adds impact to your writing.

An Active Approach to Writing

Active writing gets to the point and puts you right in the action. That's why we speak in active voice; it's the best way to communicate as clearly as possible. Take a look at these additional examples of sentences in the passive and active voice. If you're looking for a helpful visual, download an active vs. passive voice infographic for your classroom or writing notebook.