Are Base Words and Root Words the Same?

The English language is made up of many closely related words. In fact, it's possible to build new words from existing words by adding affixes to the beginning and/or end of a base word or root. Base words and roots are slightly different. Exploring the meaning of a base word vs. root word will help you understand what these are and how to use them, which will help you improve your vocabulary skills. 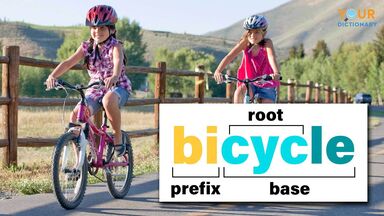 Are Base Words and Root Words the Same?
Advertisement

Basic Parts of a Word

Many words in the English language have been borrowed from other languages. The origins are usually Latin or Greek. A word can have three parts to it: a root, a prefix and a suffix. A prefix or suffix is a meaningful affix that doesn't function as a word on its own but can be attached to a base word or root.

It's the middle part of a word that holds the most meaning, however. This may be a root or a base word.

The Difference Between Base Words and Root Words

People sometimes use the terms root word and base word as if they mean the same thing, but they are different. Discover the similarities and differences.

Root words come from Latin or Greek. They aren’t usually words that can stand alone in English. They are also referred to as a "word root." When you hear these referred to as "roots," this is a modern take on root words and indicated the part of the word can't be further broken down. For example, aud is a Latin word root that means to hear or to listen.

Understanding root words will help you learn more words in English quickly. As you begin to understand the Greek and Latin roots of common words, you'll notice them in more places, and this will give you a clue to the meaning of an unfamiliar word. Knowing the meaning of a word’s root makes it easier to figure out what the English words that use it mean.

Base words, on the other hand, are always words that can stand alone in English. These words have meaning on their own, but they can also have prefixes and suffixes added to them to make new words. For example, cycle is a full word in English, but it can function as the base of other words when affixes are added. Modern linguists suggest that a base is any form you can add affixes to.

Knowing base words will help you understand new words as well as how prefixes and suffixes can change a word's meaning. Keep in mind, though, that most English words have Greek or Latin roots. The word cycle, for example, is actually based on the root cyc (which means circle).

Base Word vs. Root Word Confusion

When dealing with root and base words, the fact that most English base words actually have a Greek or Latin root can cause things to get a bit tricky. For example, like cycle, the word civil meets the definition of a base word. It is a standalone English word that can stand on its own. However, it does also have a Latin root.

Civil as a Base Word

Civil is a base word that describes someone courteous, the rights of ordinary citizens or legal proceedings based on legal matters that are not criminal in nature. This English word can stand alone, and it can also be expanded to create words like civilization, civility and civilian.

Civil as a Root Word

To make sense of what this means, consider the breakdowns of words related to civil (base word) and civ (root).

Occasionally, a base word in English is the same as a Latin root. For example, act is a standalone word in English, making it a base word. However, act is also a Latin root that comes from the Latin word actum. Prefixes and suffixes can be added onto act in order to make English words like action, reaction and actual. In this case, the root word and base word are the same (act) for each of these terms.

The Importance of Base Words and Root Words

Base words and root words are not the same, even if in a few cases a word can be labeled as both. Review some examples of root and base words to expand your knowledge. Then, practice with roots, bases, prefixes and suffixes. When you see how all the pieces of a word work together, you'll have a greater appreciation for English and how its vast vocabulary came to be.