The Basic Grammar Rules of English

It often seems like there are too many English grammar rules to keep straight — and they’re always changing. Even grammar sticklers argue over them sometimes. (When should you use an Oxford comma, anyway?) But if you master the foundational rules of English grammar, you’ll find that the trickier ones aren’t so hard to remember after all. 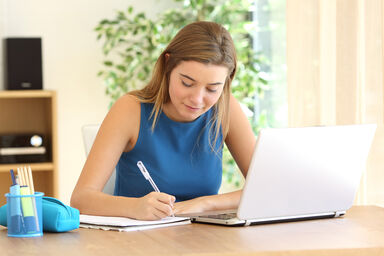 Student writing notes in a notebook at home
Advertisement

Grammar Rules for Parts of a Sentence

You already know that a complete sentence, also known as an independent clause, can stand on its own. But what makes a sentence complete, and how do the parts of a sentence work together? Once you figure out the rules for writing sentences, you’ll never mix them up again.

Every sentence must have a subject: the person, place, animal, thing, or idea that's performing the action in a sentence. For example:

The rest of the sentence is called the predicate. It expresses the action the subject is taking or shares something more about the subject. For example:

Subjects and Predicates Must Agree

Use the Correct Sentence Type

We use punctuation to establish what a sentence is trying to do, but the verbs have to help out as well. Be sure that you're using the correct sentence type, as there are four to choose from.

When direct objects are involved, the reader understands more about the sentence. For example:

Direct objects pass the action they receive from verbs onto indirect objects. For example:

Grammar Rules for Capitalization and Punctuation

All sentences must start with a capital letter. Additionally, proper nouns (such as names of people, names of places, most words in a title, companies, days of the week, holidays, first word of a sentence inside quotation marks, and so on) are typically capitalized. For example:

Finish your sentence with a terminal punctuation mark at the end of it. These include a period, exclamation mark, or question mark. For example:

Colons and Semicolons are Not Interchangeable

It seems like colons and semicolons function in the same way — but they don’t. Use a colon when writing a list of items, introducing a long, direct quote, or separating two clauses when the second one further explains the first. For example:

You need a semicolon only when connecting two independent clauses (instead of a coordinating conjunction), or when separating items in a list that already includes commas. For example:

It can be hard to remember all the rules for commas. The basic rule of thumb is that commas separate parts of a sentence, whether they’re items in a series or clauses and phrases in a sentence. For example:

Use parentheses to enclose words that clarify other parts of a sentence. They contain information that's not essential to the main point, making them full of supplementary (but interesting) information. For example:

People love their apostrophes, but they really only have two uses: noting when letters are missing in a contraction and showing a noun’s possession. For example:

Be a Grammarian for Life

In a land of BRBs and LOLs, be a member of the crowd that doesn't solely rely on spellcheck and autocorrect. For more ways to fine-tune your grammatical knowledge, check out: