Modifiers, or descriptive words or phrases, can add a great deal of interest to a sentence. They are an important tool for writing descriptive, engaging content. However, when used improperly, modifiers can be confusing or distort the meaning of a sentence. In this article, we will deal with one particular modifier error: the dangling modifier. 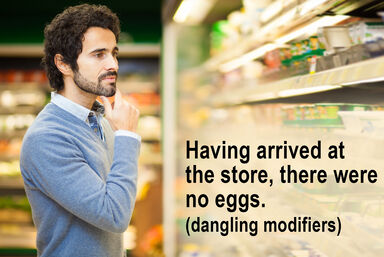 What Is a Modifier?

A modifier is a word or phrase that adds additional detail to a sentence. Modifiers can be adjectives, adverbs, possessive pronouns, or phrases, but they must always modify, or describe, something in the sentence. They usually describe a subject, verb or object.

The excited girl ran quickly to the yellow house.

Where Should Modifiers Be Placed?

Modifiers need to be as close as possible to what they're modifying. Ideally, they should be directly next to the thing being modified, either before or after, sometimes with a helping verb.

The girl was happy.

Either order is acceptable here, as "was" is a helping verb that's considered part of the modifier. Adjectives like "happy" go before the thing they are modifying or after, with a helping verb.

Adverbs can go before or after the thing they are modifying.

Possessive pronouns go before the thing they are modifying, or after, with a helping verb. "Is" is the helping verb in the second sentence below:

That is his toy.

That toy is his.

Phrases can go before or after the thing they are modifying, usually with a comma or commas.

Alex, a refined painter, is known for his work.

A refined painter, Alex is known for his work.

What Is a Dangling Modifier?

Dangling modifiers are bad. A dangling modifier is a common grammatical mistake in which a modifier appears in a sentence, but the subject being modified isn't there. Lacking a subject, the modifier hangs in empty space, "dangling." Here's an example.

Having arrived at the store, there were no eggs.

Having arrived at the store, Adam discovered there were no eggs.

This sentence now has a subject - Adam - being described by the modifier. The modifier is no longer dangling, since it is describing Adam.

Take a look at this example sentence:

Arriving late, the beginning of the movie.

Here, the dangling modifier creates a sentence fragment. Without a subject, there's no way to know what happened after the previews. Thankfully, it's a simple fix:

Since we arrived late, we missed the beginning of the movie.

It's easy to miss a dangling modifier in a sentence that seems to imply a subject.

Without wanting to be rude, it was difficult to leave early.

The intuitive meaning of the sentence is clear, but as written, the phrase is modifying "it." Since "it" does not clearly refer to any person who wanted to leave early without being rude, this is a dangling modifier. Here's the corrected version:

Since Matt didn't want to be rude, it was difficult for him to leave early.

Some dangling modifiers consist of only a single word.

Happy, there was singing the whole way to our grandparents' house.

Here "happy" has nothing to modify, becoming a dangling modifier. A corrected version might be:

We were happy and singing the whole way to our grandparents' house.

We handled a one-word problem with a one-word solution. The most important change in the sentence was adding "we," providing a subject to be happy.

Of course, other dangling modifiers can be more complex.

Without considering the schedules of all the people involved, the party was canceled.

Here the modifier is most of the sentence, and it's still dangling. There's nothing in the sentence capable of "considering" anything. Here's a fix:

Since the hosts failed to consider the schedules of all the people involved, the party was canceled.

Regardless of size and significance, modifiers always need a subject to modify. Otherwise, they dangle.

Dangling modifiers are a common mistake in English, but they're easy to fix. Just keep your modifiers as close as possible to the thing modified and make sure they refer to something that's explicitly in the sentence.

If you still need help, we have a whole list of examples of dangling modifiers so you can see them in action. For more general help, check out our article on misplaced modifiers, too. Happy writing!