What Is an Article? Explanation, Usage, and Examples

A, an, and the are three of the smallest words in the English language — but that doesn’t mean they’re the least important. Using these three articles correctly might feel like second nature, but there are specific rules for using indefinite and definite articles — and it all depends on the noun they accompany. 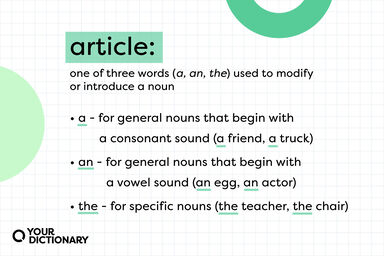 definition of article in grammar with three examples
Advertisement

What Is an Article?

An article is one of three small words that comes before a noun: a, an, and the. You’ll find one (or more) in nearly every sentence.

Most people believe that there are eight main parts of speech: nouns, pronouns, verbs, adjectives, adverbs, conjunctions, prepositions, and interjections. Because articles modify nouns, we often group them as a type of adjective.

Articles also fall into the category of determiners, like this or several, which introduce nouns.

What Do Articles Do?

The indefinite articles a and an introduce general singular nouns, typically when the speaker doesn’t know or care which noun they’re talking about.

When using plural or uncountable nouns (such as dogs or water), use plural determiners (many dogs, some water).

We use the for specific singular, plural, and uncountable nouns.

You should also use the before:

Can you decide which article completes each sentence?

Did you choose the correct article for each sentence?