You may have heard that two wrongs don't make a right. That's certainly true of grammar. Applying two negative statements to the same subject is a double negative, almost always a grammatical no-no guaranteed to confuse your readers. 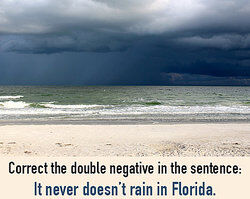 What Is a Double Negative?

In fact, it doesn't mean anything. Double negatives are bad English, at least when it comes to writing. Conversational context usually clarifies double negatives in speech, but when written down, they create structurally meaningless sentences.

Fundamentally, double negatives are nonsense in English, because they cancel one another's meaning. This creates a positive sentence that didn't require the negatives in the first place.

We'll borrow from classic rock for an example:

"We don't need no education."

"We don't need education" and "we need no education" both say the same thing. Saying both at once means they cancel each other out, and we DO need education. Maybe this whole time Pink Floyd was telling us they needed enough education to understand why double negative usage is wrong!

Interestingly, in some languages -- like Russian, Macedonian, Serbian and Croatian -- if you want to express a negative connotation, you need to use a negative throughout the phrase or sentence. Not so in English. For English speakers, one grammatical clause only requires one negative.

Why Double Negatives Are Bad English

In short, they're too long. Since a double negative expresses a positive - "I don't want no cake" technically means you do want cake - proper English requires you simply write a positive sentence: "I want cake."

By itself, that would be bad enough. Good English writing is about expressing your ideas in short, clear terms. But, double negatives also create confusion. In conversation, English speakers know that "I don't want no cake" means the same as "I don't want cake." That means the written meaning of a double negative differs from the spoken meaning. That's a big problem and one you must avoid.

Test your double negative knowledge! For each of the example sentences below, identify the double negative -- there may be more than one per sentence -- and offer a grammatically correct alternative sentence.

A downloadable PDF of this exercise is also provided below.

Good English is built on positive declarative sentences. Double negatives add words and muddle meaning. Instead, simply write what you mean using straightforward language. Have a look at our list of double negative examples for further study.