Grammar Clauses in English Made Easy

Clauses are units of grammar that contain a predicate (verb) and a subject (noun). Some clauses can stand on their own as sentences (independent), and some cannot (dependent). Beyond being broadly categorized as independent or dependent, there are many other types of clauses in English grammar. Discover different types of clauses and learn how they work. 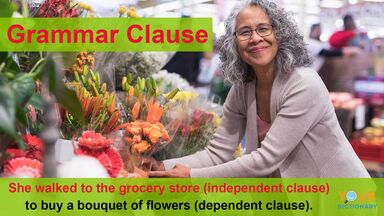 Adverb clauses, also referred to as adverbial clauses, are dependent clauses that function like an adverb. They modify verbs, other adverbs or adjectives. These clauses are typically used to elaborate when, where, why, how, how much, or under what condition the action of the sentence took place.

Adjective clauses are dependent clauses that modify nouns and pronouns. These clauses tend to begin with pronouns such as who, whose, that, or which.

A noun clause is a group of words that band together and act like a noun. Nouns clauses are used when a single word isn't enough. They're always dependent clauses. They often begin with words like how, that, what, when, where, which, who, and why.

A subordinate clause is a dependent clause that only has meaning in the context of a main clause to which it is connected. For example, in the example,”She bought a new computer because she needed one,” the phrase “because she needed one” is a subordinate clause. It would not make sense without the main clause that tells what “one” refers to (a computer). They include subordinating conjunctions.

A conditional clause is a type of subordinate clause. This type of clause is used to convey something that is possibly or probably going to happen. It usually begins with a conditional conjunction such as “if” or “unless.”

A relative clause is a type of subordinate clause that begins with a relative pronoun, such as which, that, whom, whose, when, where, or who. These clauses typically identify or provide detail about the noun that comes before them in a sentence.

By correctly using different types of clauses, you can quickly improve the quality of your writing as well as your ability to communicate with an audience. Clauses help you direct the attention of the reader so that your sentences are understood. Proper usage will also help you avoid dreaded sentence fragments and run on-sentences. To prevent punctuation issues, make sure you know how to properly punctuate sentences featuring all kinds of clauses. Review the basic punctuation rules for a refresher.