Who or Whom? Easy Ways to Remember

Do you know when to use who or whom in a sentence? Telling the difference between these words is easier than it seems. It’s all about knowing how each pronoun functions within a sentence. Learn some easy ways to remember when to use who vs. whom, including tips and tricks to make it all stick. 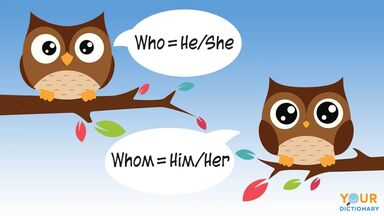 who or whom example
Advertisement

The Difference Between Who and Whom

Who and whom are both relative pronouns. They function to connect a noun or another pronoun to a phrase or clause with more information. Both words can also work as interrogative pronouns in questions. However, even though they are both the same kind of pronouns, they are not interchangeable. The difference between these words is:

The Best Way to Remember

Replacing the Pronouns in Questions

Another easy way to remember is the “m” in him and whom. If you can answer the question with him, you’re using whom correctly. If it doesn’t make sense, it’s probably supposed to be who instead. For example:

The same rule applies in relative clauses. It’s a handy trick that helps whenever you’re stuck between who and whom when writing a sentence.

Example Sentences With Who and Whom

Knowing who is the subject of a clause while whom is the object of a clause is one thing. Seeing it in action will help this stick in your memory bank. Let’s look at a few example sentences with each word.

Remember, who is the person doing the action. As the subject of a clause, who tends to come before the verb of the sentence.

Now that you know how to use who correctly, take a look at sentences with whom. Notice where they’re found in a sentence: after the verb (except in a question) and after a preposition.

Knowing Who or Whom, At Last

Let’s end the great debate between who and whom by remembering to test it with a quick switch between he and him. If you can remember that easy trick, you’re guaranteed to choose the right pronoun every time. Once you’ve mastered these pronouns, move on to the difference between whoever vs. whomever. Then, explore why you shouldn't use the phrase "To Whom It May Concern" anymore. You can also learn the fundamental rules of using who vs. that. vs. which.