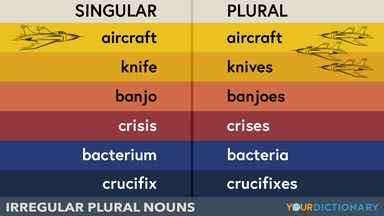 Certain words do not follow the rules for regular plurals. You'll find some words with no plural form at all. Since there is no way to know which nouns have an irregular plural, you have to memorize them. Explore a few different types of irregular plural nouns without a plural form.

Non-count nouns are used as collective nouns and have no plural form because they are assumed to be plural. Most abstract nouns are noncount nouns. A few examples of noncountable plural nouns include:

Certain other nouns have the same singular and plural form. A large number of animals happen to follow this rule. These examples will be spelled the same.

In addition to non-count nouns and unchanging nouns, several types of irregular plurals follow a pattern in the English language. Explore examples of different endings and how they change, along with irregular plural nouns that change completely.

Nouns With -f or -fe Endings

Exceptions to this rule include roof and proof, among others. These will get an “s” on the end, as in roofs and proofs.

Nouns Ending in -us

For many words that end in “us,” change the “us” to an “i” (especially if it comes from a Latin word). There are exceptions to this rule, and it’s becoming more acceptable to add “es” instead of changing to “i” in some cases.

For nouns that end in “o,” you add either “s” or “es.” Generally, most nouns ending in “o” just add “s” to make the plural, especially if there's a vowel before the final “o.” However, you'll also find words that work with both endings.

Words With -is Endings

Nouns that end in "um" often become plural by changing “um” to “a.” See how this looks in action here.

Another irregular plural noun ending that changes is “ix.” In Greek and Latin words, this will change to “ces” or “xes.”

Certain words do not add a letter to the end to become plural. Instead, these irregular plurals change the word itself. These words simply need to be memorized.

Now that you’ve seen irregular plural nouns, it’s important to review how regular plural nouns work. The general rule for making a noun plural is that if the word ends in "s," "x," "z," "ch" or "sh," add an "es." Review a few examples of what this might look like.

For all other non-irregular nouns, simply add an "s" to the end of the word.

An exception to the add an "es" rule is if the "ch" ending is pronounced with a /k/ sound, you add "s" rather than "es."

The best way to learn and understand irregular plurals is to practice speaking the English language, to read a great deal, to pay attention to words and phrases that you see and hear, and to assemble a list of words with irregular plurals so you can begin to understand how to make each noun plural correctly. Looking for more fun grammar rules? Check out definite and indefinite articles. Is it “a,” “an” or “the”? Find out!