Modifiers are words or phrases that provide additional detail about a subject, verb or object in a sentence. Modifiers can be words or phrases; for example, the word "pretty" can modify "girl," and the phrase "who was smart" can also modify "girl." According to the rules of grammar, modifiers should be placed as close as possible to the person or thing that they are modifying. When a modifier is not placed properly in the sentence, it can create confusion and is considered to be a "misplaced modifier." 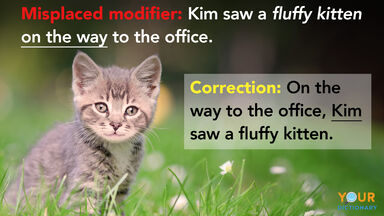 Here follow several examples of misplaced modifiers and how to fix them.

Example #1: Mark and the Chair

The most common way to misplace a modifier is to put unnecessary words between it and the word or phrase it modifies.

After painting all day, the chair was admired by Mark.

The modifier here is the phrase "after painting all day." It is clearly intended to refer to Mark, rather than the chair, even though the chair is closer to the modifier than Mark. This misplaced modifier can be fixed with a simple rephrase.

After painting all day, Mark admired the chair he had painted.

Another common mistake with modifiers is to build a sentence where the modifier simply refers to the wrong word.

Bored with all the lectures, happiness overcame Will at the end of the school day.

Here, "happiness" is being modified by the phrase "bored of all the lectures." Obviously, "happiness" can't be tired or bored of anything; it's not that kind of noun. It's Will who's bored with his lectures and happy to be done. We can express that sentiment with a simple change of sentence structure.

Bored with all of the lectures, Will was happy when the school day ended.

Always make sure a modifier is modifying the right word. That kind of error can change the meaning of a whole sentence.

Example #3: On Children and Cake

Modifiers always need to be as close as possible to the words they modify. This is a common mistake, especially since conversational English doesn't take much notice of it. In formal writing, however, it's important to avoid mistakes like this.

The teacher handed out slices of cake to the children on the end of a knife.

Unless the teacher is very bad, the children aren't on the end of a knife. We need to change the sentence to make it clear the knife is only being used on the cake, not the students.

The teacher used a knife to hand out slices of cake to the children.

The formal requirements of written English are often stricter than those used in conversation. A sentence that sounds entirely reasonable spoken out loud may still have a misplaced modifier that will get you in trouble.

Example #4: An End to His Driving

A misplaced modifier can lead to a sentence that is grammatically correct but fails to make sense.

George almost worked 12 hours a day to save up for the holidays.

Grammatically, the above sentence is fine. In practice, unless George spends a lot of time almost doing his job, it's nonsense.

George worked almost 12 hours a day to save up for the holidays.

Writers and linguists like to refer to Noam Chomsky's classic phrase, "Colorless green ideas sleep furiously." Grammatically, that phrase is perfectly acceptable. It just doesn't mean anything. Misplaced modifiers can create the same effect, making it important to edit for meaning as well as grammar.

One of the ways in which conversational English and formal English can differ is word order. A sentence that clearly conveys its meaning in speech can fail to do so when written down.

Kim saw a fluffy kitten on the way to the office.

Once again, modifiers modify the nearest possible word. In theory, this sentence is describing a small fluffy cat headed to work. Adorable, but probably not what the writer meant.

On the way to the office, Kim saw a fluffy kitten.

The nice thing about misplaced modifiers is that they're usually easy to fix. Simply rework the sentence so that the modifier is as close as grammatically possible to the word or phrase it modifies.

On occasion, a misplaced modifier will create a sentence that is possible, but not likely.

Mrs. Macready gave me a dollar only to rake her whole yard and wash her windows.

This sentence could be correct. The writer could be pleasantly surprised to receive a whole dollar to do all that work. Based on the amount of work done, however, it's more likely the speaker felt underpaid. That requires us to move the modifier.

Mrs. Macready only gave me a dollar to rake her whole yard and wash her windows.

Catching misplaced modifiers is a question of critical reading. Sentences that seem to work can, on closer inspection, reveal syntactical errors.

As with the miserly Mrs. Macready above, it's dangerously easy to misplace a modifier that creates a plausible meaning for your sentence other than what you intended.

It may be true that this student almost aced every project. Maybe every last project had just one or two minor errors. But, if the writer meant that Megan aced the majority of her projects, this is the correct phrasing they would've wanted:

There's a great deal of difference between getting 89% on all of your projects and getting 100% on all but one. Conveying that difference comes down to where you put your modifier.

While in Vegas, a lot of money was lost.

This is a classic dangling modifier: it doesn't explain who lost the money or how, nor does it tell us who was in Vegas. All it needs to solve that problem is a subject.

While in Vegas, we lost a lot of money gambling.

"While in Vegas" is the modifier here. It is meant to provide additional information about the person who was in Vegas who lost the money.

You can avoid modifier errors, either dangling or misplaced, by ensuring that each modifying word or phrase is as close as possible to the person or thing being modified. To guarantee your modifiers are well-placed, read up on the rules of syntax and double check our examples of misplaced modifiers.