Rules for Using There, Their and They're

The English language is full of commonly confused words that trip up native speakers and new learners alike. Many sound the same, but have different spellings and meanings, such as "there," "their" and “they’re.” Luckily, the rules for the difference between there and their, as well as the contraction they’re, aren’t difficult to remember. Discover the difference between these words so you never make another slip up again! 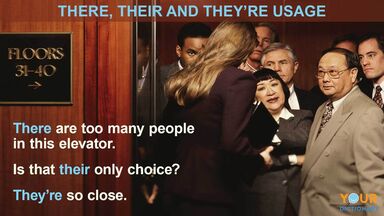 difference between there, their and they're
Advertisement

Rules for Using There, Their and They’re

Paying attention to the meaning and parts of speech of these three words, as well as common ways they are used in sentences, will help prevent errors when using them in your writing.

The word there is most commonly used as a noun. In this sense, it refers to a particular place.

Rule #2: There as an Adverb

The term there can also work as an adverb. In this sense, it is used to mean the opposite of the word “here.”

Rule #3: There as an Adjective

The word there is sometimes used to modify a noun or pronoun, which means that it functions as an adjective.

Rule #4: There as a Pronoun

The word there may also be used as a pronoun to introduce a noun or a phrase.

Rule #5: Their as a Possessive Adjective

The word their primarily works as a possessive adjective, to describe something that belongs to more than one person. A noun typically follows the word their.

Rule #6: They’re is a Contraction.

The word they’re is a contraction formed by combining the words they and are. They’re should only be used in situations where the phrase “they are” could be substituted without changing the meaning of the sentence.

Which There Do I Use? (or Their or They’re)

To make sure you’re using the correct word in your writing, keep these tips in mind:

Why Are There, Their and They’re So Similar?

There, their and they’re are examples of homophones. Breaking down the word homophone can help you understand its meaning. Homo means "same," and phone means "sound." So, words that are homophones will have the same sound. However, they are not spelled the same and they have different meanings.

Think About the Context

Look out for those confusing homophones! When writing, make sure you slow down enough to pay close attention to how you're spelling words in their context. Remember, the spell check function on your computer may not pick up on misused words like there, their and they’re. Even if they are used in the wrong context, they are technically spelled correctly.

Writing deliberately and closely proofreading your work will help you avoid mistakes when using homophones like these. Review these examples of their, there and they’re in sentences to reinforce what you have learned. If you now feel like you've mastered the rules of when to use these words, use this practice exercise worksheet to test your skills.