Rules for Writing Numbers: Know When to Spell Them Out

Numbers don't just show up in math assignments, but they also appear in everyday writing. Like many facets of the English language, there are rules for writing numbers. Certain numbers are spelled out with letters and others are only written as numerals. You've probably come across more than your fair share of Top 10 lists; why is it not a Top Ten list? Learning how to write numbers in English will reveal the answer! 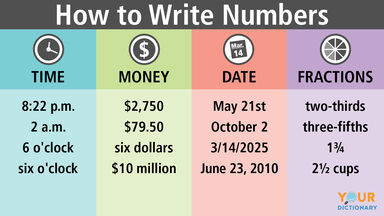 Rules for Numbers That Are Spelled Out

Are you wondering when to write out numbers? There are several situations in which number words should be spelled out. Of course, as is often the case in English, there are some exceptions to the rules outlined below. As with other grammar rules, rules for writing numbers change according to certain style guides (for example Chicago Manual of Style, AP, MLA, etc.). Discover several general rules for spelling out numbers.

When writing numbers under 10 in a sentence, they should be spelled out. This is true regardless of where they fall in a sentence.

Whenever there are numbers at the beginning of a sentence. those numbers should be written out.

When compound numbers are spelled out, such as when they are at the beginning of a sentence, they should always be hyphenated.

Fractions at the beginning of a sentence must be spelled out. Within a sentence, they can be expressed as numerals or words. When spelled out, they should be hyphenated.

Guidelines for Numbers That Require Numerals

Part of learning how to write numbers in English requires learning the situations in which numbers should not be spelled out. Instead, they should be presented as numerals. Of course, these rules for using numerals all assume that the number isn't positioned at the very beginning of a sentence or question.

Use Numerals in Headings and Titles

When you include a number in a heading or a title, it's better to use a numeral rather than spelling out a word. That's why you'll see "Top 10" in the title of listicle articles rather than "Top Ten." This rule is true even when the number is the first word of the title.

Use Numerals for Numbers 10 and Above

When you include numbers 10 or higher in sentences, those should be expressed as numerals, unless they are at the very beginning of the sentence.

Use Numbers for Mixed Fractions

While fractions are ordinarily spelled out, there is an exception to this rule for mixed fractions. A mixed fraction combines a whole number and a fraction. These require numerals unless positioned at the beginning of a sentence.

Use Numbers for Days of the Month

Dates should be expressed using numbers. There are a few special rules for properly writing dates. When writing just the day of the month, you can use a cardinal (4) or ordinal (4th) number. Both are correct.

Use Numbers for the Full Date

Please note that it is not correct to use ordinal numbers (1st, 2nd, 3rd) with full dates. It would be incorrect to state 'March 23rd, 2010." There are special rules for writing the date in military format.

Use Numbers for Percentages

When writing percentages, use numbers paired with the % sign.

The word "percent" should generally only be used when spelling out percentages in words, which you would only do at the start of a sentence.

Use Numbers for Decimals

Decimals should be written as numerals.

Rules for Writing Numbers and Money

When it comes to money, numbers follow their own set of rules. Money is usually written as numerals, but can be written out when the amount is vague or rounded up — "it cost two or three dollars."

The most important guidelines to keep in mind are:

There are some special instances where numbers may be written in multiple ways.

When numbers are in a list, it is generally ideal to keep all the numbers in the list consistent, even if some numbers are under 10 and some are over. However, if you are following a style guide that dictates to always spell out numbers under ten (such as AP), you should follow the rules even though that would result in an inconsistent list. Otherwise, consistency is best.

When you're writing a sentence that has two numbers side-by-side that aren't part of a related list, you'll need to adjust the text for clarity. In this case, it is best to write one number as a word and the other as a numeral.

Another option would be to rearrange the sentence to separate the numbers. You could say, "There will be 12 kids who are 10 years old at my house this weekend."

When you are writing a check that will be used to draw funds on a bank account or credit card cash advance, a special rule applies. In this case, you will need to indicate the amount numerically in the designated spot beside the dollar sign. Then, you'll need to spell it out. You can use words for the dollars and cents, or opt to express cents as a fraction out of 100, since it takes 100 cents to make a dollar. Be sure to include the word "and" between the dollars and the cents.

Rules for Referring to Decades

When referring to a certain decade, there are a few different options. You can use a word, the full date or an abbreviated date.

When writing the time along with a.m. to designate morning or p.m. to designate evening, use the numeral to designate time. For the precise time, add the minutes after a colon (8:22 p.m.) When referring to an even hour, just list the hour rather than including that there are zero minutes (use 2 a.m. instead of 2:00 a.m.). Don't use words for the time when using a.m. or p.m. (unless the time is the first word in the sentence).

How to Specify Time With O'clock

The phrase o'clock stands for "of clock," though that exact phrase is not standard English language usage. However, o'clock can be used when you're referring to an even increment of time. It should not be used with a.m. or p.m. Instead, you could specify "in the morning," "in the evening" or "at night" to clarify the meaning. When using o'clock, you can use numerals or words to designate time, opting to comply with the rules of any style guide you are following (if applicable).

Guidelines for Midnight and Noon

It is common to spell out noon and midnight instead of writing 12 p.m. and 12 a.m, though any of those options are correct. However, you should not combine both options.

When in Doubt, Spell It Out

When in doubt about whether to spell out or write a number, it's usually best to spell it out. However, for larger numbers, you can always err on the side of the numeral form.

Master How to Write Numbers in English

Now that you are familiar with when to spell out numbers, take the time to discover some more rules for writing numbers. For example, explore the rules for using commas in numbers. Then, you may want to take an even deeper dive into numbers and explore those that can be expressed as a quotient by reviewing these rational number examples.