Which vs. That: When to Use the Right Word + Quiz

If you're struggling to decide whether which or that is the correct word in your sentence, there's an easy way to decide. Take a look at several explanations and examples of which vs. that to help you figure out their differences. When you're ready, you can take a quick quiz to test your knowledge. 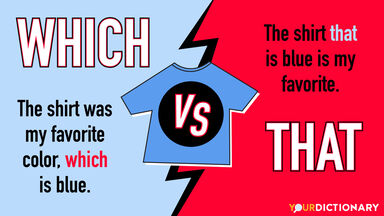 Using Which vs. That

Use Which to Add Extra Information

Which is non-essential (also known as non-defining or nonrestrictive) because it adds information rather than limiting it. If you leave a non-essential item out of a sentence, it won’t change the overall meaning of the sentence.

You can usually recognize a nonrestrictive element because it is surrounded by commas or parentheses. For example:

Use That To Identify the Noun or Pronoun

Which vs. That Quiz Practice Questions

Take a quick which vs. that quiz to see if you grasp the concept. Choose the correct word from the parentheses for each sentence and check your answers below.

Which vs. That Printable Quiz

If you want to use the quiz in a classroom setting or to take it without the temptation of looking at the answers, you can print the which vs. that quiz in PDF format below.

Answers to Which vs. That Quiz Practice Questions

Check out the answers to the quiz and read the explanations to better understand why which or that is correct.

Which Word — That's the Question

Knowing whether to use which or that in a sentence doesn't need to be confusing. The information that comes after which adds extra information, while a phrase that starts with that identifies the noun you're talking about. Now that you've figured out which and that, learn when to use who.