Snowclones and Why They Feel Like a Writing Brain Freeze

A snowclone sounds like it could be cool (Is it a weather event? A ski move? A new kind of dessert?) but in fact, the term is almost always used pejoratively. It’s a template device often used in memes and clichés where X, Y, Z, etc. can be replaced by any word. So: to snowclone or not to snowclone? Let’s answer that question. 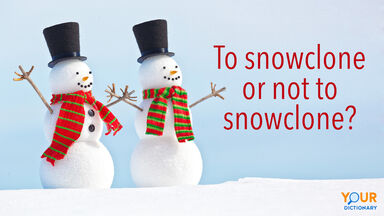 What Is a Snowclone?

A snowclone is a phrasal template where certain words may be replaced by others. For example:

While this may look like an algebra equation, think of it as a “fill in the blank” template similar to Mad Libs. Each letter can be replaced by a word or phrase. For example: “If loving you (X) is wrong (Y), then I don’t want to be right (Z)!” Snowclones typically follow a familiar pattern like this where words can be inserted in a particular order.

How Did Snowclones Get Their Name?

The word snowclone was coined by American linguists Geoffrey K. Pullum and Glen Whitman. In 2003, Pullum published a blog post called Phrases for Lazy Writers in Kit Form where he stated, “The thing we need a name for is a multi-use, customizable, instantly recognizable, time-worn, quoted or misquoted phrase or sentence that can be used in an entirely open array of different jokey variants by lazy journalists and writers.”

Then in 2004 Pullman wrote about his colleague Glen Whitman’s suggested term snowclone. The name originates from the clichéd observation that Eskimos have multiple words for snow.

For several years afterwards, Pullman documented instances of snowclones on his blog. Eventually, other bloggers began using the term.

There are many snowclones that people use in everyday life, often without even realizing it. For example:

In Soviet Russia, Y Xs you!

This popular phrasal template known as the Russian reversal was popularized by Russian comedian Yakov Smirnoff and has become a popular meme format in the internet age. The X and Y can be replaced with any subject and verb to create an inversion. For example: “In Soviet Russia, television watches you!”

This is a play on “to be or not to be” from Shakespeare’s Hamlet. The verb “to be” can be replaced by anything, such as “to drink or not to drink”

When happens in X stays in X.

This snowclone template was popularized by Gertrude Stein’s “rose is a rose is a rose” and can apply to any situation where a word is repeated. You’ve all heard “Love is love” or “fair is fair,” but you can make a snowclone with this template using any word you choose.

Cliché Is Cliché: Why You Should Avoid Using Snowclones

While snowclones can be fun, especially in memes, you should avoid using them in general. Much like any cliché, the snowclone can be tired and conventional. To see if a phrase qualifies as a snowclone, check out the Snowclone Database.

You can also ask yourself how else you could convey the same message and how much of your audience will “get” the reference you’re making. If there is another way to express this idea, go with that! After all, clichés are clichés for a reason, but your creativity is unique to you.

It’s important to identify snowclones when you come across them so you can avoid them in your own writing. While you’re here, explore some other devices you can use to engage your readers.