Is It “Season’s Greetings” or “Seasons Greetings”? The Right Answer and What It Means

Holiday greetings help you know that it’s the jolly time where the weather is cold, the oven is preheated, and your family is ready to get on your nerves. While there are plenty of holiday greetings, one that stands the test of time is season’s greetings. Or is it seasons greetings? And how are you supposed to even say it to another person? 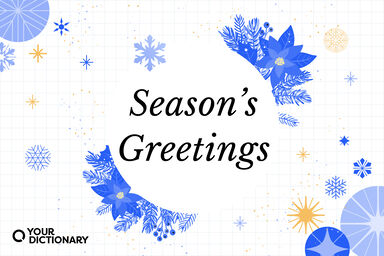 Why? Well, that apostrophe indicates a singular possessive noun. The greetings in the phrase belong to the season (in this case, the winter holiday season). This helps to communicate that you are wishing happy thoughts and good vibes toward a person during the holiday season.

Without the apostrophe, seasons greetings imply a greeting related to all seasons — spring, summer, fall, and winter. That might not be unwelcome, but it’s definitely strange.

How and When To Use “Season’s Greetings”

Unless you’re making a joke, try to keep your season’s greetings to the winter holiday season. There aren’t any strict guidelines here, but you should be fine saying it around Thanksgiving and even a little after New Year’s Day.

Beyond that, you can be fairly free with your use of season’s greetings, as long as you’re not being too annoying about it. That includes:

"Season’s greetings" can be said as an exclamation on its own, or it can be used as part of a sentence like, “The Smiths extend season’s greetings to all of our friends and family and hope for a wonderful new year.”

"Season’s Greetings": What Does It Mean?

Season’s greetings is a broad, nondenominational greeting used during the winter holiday season. You’ll more often see season’s greetings written on a card, but people do say it to each other as a general show of positive cheer and well-wishes. Its usage is similar to happy holidays.

Where Did “Season’s Greetings” Come From?

No one knows for sure who said or wrote season’s greetings first. People may have been saying it regularly as far back as the mid-1800s, but it certainly became a standard part of advertising by the 1900s.

Not everyone celebrates Christmas. Some people celebrate Hanukkah or Kwanzaa. Some people don’t celebrate any winter holidays at all. Season’s greetings offers a perfectly non-denominational way to wish someone well during the winter season, but you have plenty of other options.

Happy holidays is the default non-denominational greeting for the season. Why single out any singular holiday when you can include all of them in one greeting? Despite what many believe, happy holidays has been around for decades. Some records show that the greeting goes as far back as the 1860s.

May Your Days Be Merry and Bright

Although this line originates from the classic song “White Christmas,” the meaning has become broad enough to entail general winter holiday cheer. Merry here refers to being cheerful and lively, while bright depicts the general warmth of being around the people you love.

Eat, Drink, and Be Merry

A general wish for hedonism and enjoying your life, eat, drink, and be merry is a nice casual saying that fits best before a meal or party. The full idiom is “eat, drink, and be merry, for tomorrow we may die,” but you can leave out that last part if you don’t want to remind people about the fleeting nature of life.

Although some people attribute the idiom to Shakespeare, it’s actually a combination of verses from the Bible. Still, even with the religious context, the phrase is broad enough to apply to anyone.

Invent Your Own Holiday Greetings

While you might not get a greeting as short as happy holidays or season’s greetings, you can still wish someone a happy winter season without ever even mentioning a holiday.