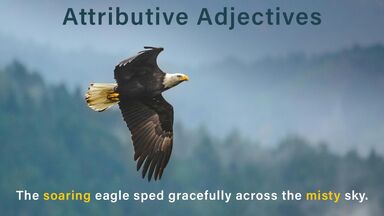 All adjectives describe or modify certain nouns in a sentence or question. They provide descriptive information about the noun, such as its appearance, color, shape, size, age, origin, and more. An attributive adjective ascribes a certain characteristic of the person, place or object represented by the noun that it is placed before in a statement.

Consider the example sentence: I admired the pretty sky.

In this example, pretty is an adjective; it is describing the appearance of the sky. Because it is placed before the noun (sky), the word pretty is an attributive adjective. This provides a greater level of detail for the reader than if the word pretty was not included as a modifier. Without that word, readers wouldn’t know what the narrator found admirable about the sky.

Predicate Adjectives Appear After the Noun

Tip: When proofreading your work, be on the lookout for sentences or questions that have predicate adjectives. Review them closely to determine if you could convey the same information with fewer words by editing them to include attributive adjectives rather than predicate.

Enhance Your Writing With Adjectives

As you can see, attributive adjectives that appear before the nouns they modify are generally more straightforward than their counterparts that follow the noun they are describing (predicate adjectives). Both do have a place in quality writing, as do other types of descriptive words. Choose the option that most effectively conveys your intended meaning to people who will read your work. No matter what type of adjectives or other descriptive terms you incorporate into your writing, it’s important to use them properly. While adjectives are already on your mind, this is a great time to review some basic guidelines about adjective usage.