Adjectives turn clowns into funny clowns and cats into fluffy cats. But beyond clowns and cats, what can adjectives do? It all depends on the type of adjective you’re talking about — and there are more than you think. 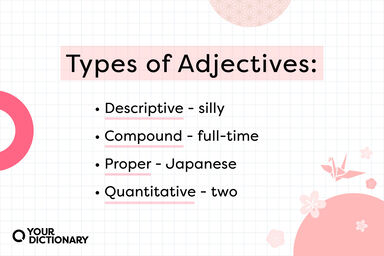 What Do Adjectives Do?

Adjectives add descriptive language to your writing. Within a sentence, they have several important functions.

Choosing the correct type of adjective can improve your writing and interest your readers. To do so, you need to know what each kind of adjective does in a sentence. This printable adjectives chart will serve as a reminder whenever you need a little help.

Descriptive adjectives express a quality or attribute of a noun.

Coordinate adjectives work together to modify the same noun. They’re separated by the word and or separated with commas.

Using a phrase with multiple adjectives to modify the same noun can create an adjective phrase.

A compound adjective is made up of multiple words that work as one word to modify a noun. They are typically hyphenated, but not always.

Proper adjectives refer to specific nouns. Like proper nouns, they must be capitalized.

Distributive adjectives, such as any, each, either, every, and neither, modify each member of a group equally.

Interrogative adjectives, which include what, which and whose, ask a question. They come right before a noun or pronoun.

Adjectives that appear after the linking verb and modify the subject of the sentence are known as predicate adjectives. They’re also called subject or object complements.

Quantitative adjectives describe the amount of something. They can be numbers or other adjectives, and they answer questions like “How much?” or “How many?”

Unlike indefinite adjectives, quantitative adjectives are clear about the amount of something.

Can Articles Be Adjectives?

There are three articles (a, an, the) in the English language. They come before a noun to specify which noun you’re talking about — just like adjectives.

That’s why articles are considered a special class of adjectives.

Become agile with your adjectives with a quick quiz. Can you name the types of adjectives that are bolded in each sentence?

Check out the answers to the adjectives quiz to see if you understand all the types.