What Are Coordinate Adjectives? Meaning and Use Explained 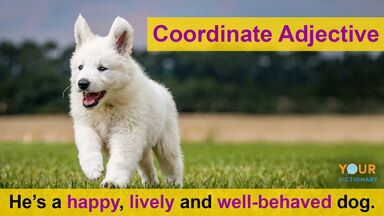 How to Make Coordinate Adjectives

You may know that an adjective describes or modifies a noun. Examples of adjectives (in bold) modifying nouns (underlined) in sentences include:

These adjectives help us know more about the dog, Melissa and the gift. But sometimes you want to describe your nouns in more detail. When you describe a noun with more than one adjective, you've formed a coordinate adjective.

Notice that each adjective describes a different part of the noun, but is equally important to the sentence. For example, a "happy and lively" dog is much different than a "happy and calm-tempered" dog. However, neither "happy" nor "lively" is a more important adjective than the other.

You can add more adjectives to a coordinate adjective as well. For example:

Each adjective helps you understand more about the noun. While you can technically add as many coordinate adjectives as you want, make sure not to overwhelm your reader with a long list of adjectives.

These sentences are all correct. So are these:

As long as both descriptors are independently modifying the same noun, you can choose between a comma or the word “and.” It depends on your preferred writing style and which version sounds best to you.

When your coordinate adjectives include three or more words, separate them with a comma. You can choose between the word "and" or a final comma between the last two adjectives. For example:

As with shorter coordinate adjectives, it's your personal preference to use "and" or a final comma in these longer lists. Check with your style guide if you choose to add an Oxford comma (a comma between the final adjective and the word "and") to your list, as some style guides would rather not include two commas in a list of three.

Not every descriptor before a noun is serving as an adjective. Consider these examples:

"Fountain pen," "post office" and "hot dogs" are all compound nouns. You can add an adjective in front of these nouns to modify them, but they're not coordinate adjectives. For example, “red” is modifying the compound noun “fountain pen.” “Fountain” isn’t modifying “pen.”

The order of coordinate adjectives isn’t set in stone. Rather, it’s subject to the writer’s preference. These adjectives can independently modify the noun and are, usually, of equal importance. For example, "He's a happy and lively dog" makes just as much sense as "He's a lively and happy dog."

Coordinate adjectives are a great addition to our writing. They help us paint illustrative pictures readers will appreciate. To be sure you’re a master of the commas you'll need for creating coordinate adjectives, check out eight times commas were important. Keeping your comma game on point will help you paint those illustrative scenes with accuracy and clarity.