7 Grammar Rules You Can Break

Isn't this exciting? There are so many grammar rules out there that help us button up our sentences and write with clarity and professionalism. Many of the most well-known grammar rules rose in popularity for a purpose, and they've stood the test of time. However, some of them were written when laptops were a futuristic novelty as alien as space travel. 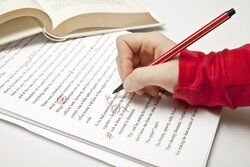 7 Grammar Rules You Can Break

Now that we live in an age dominated by hashtags and microblogs, there are certain grammar rules that are bending to meet our ever-changing needs. For example, fifth grade teachers across the country would've fainted if they found their students starting sentences with "and" or "but." But nowadays, it's not only customary, it actually creates a nice flow to thoughts and ideas (when used in moderation).

Alright. Put on your rebel jeans. It's time to get crazy. Here are seven grammar rules you can break in modern English.

1. Never End a Sentence With a Preposition

Let's start off with a quick review of prepositions. Prepositions link nouns and pronouns. Common prepositions include: against, at, despite, concerning, during, from, including, into, of, throughout, towards, until, upon, and with.

Technically speaking, prepositions should always be followed by a noun or a pronoun, like under the table or throughout the event. But which sentence sounds better?

From where did this cinnamon roll come?

Where did this cinnamon roll come from?

The second one. It sounds more conversational and natural. That forms the basis for all the rules that follow. What we're looking at here is a gentler, more conversational form of writing for the online universe. Our sentences can be constructed differently. Our paragraphs can be shorter. And, best of all, we're free to be rebellious and end our sentences with a preposition if it rolls off the tongue - or the screen - better.

2. Never Start a Sentence With a Conjunction

Now that we've addressed the end of a sentence, let's discuss the beginning of a sentence. Again, in online writing, it's not against the rules to start a sentence with a conjunction. Common conjunctions include: and, but, or, so, and yet.

College professors of old would uncap their red pen if you started a sentence with "and" or "but." And, yet, those days are over. In truth, conjunctions have become something akin to transition words, linking our paragraphs, sentences, and thoughts together.

Especially when you're working in the online hemisphere, feel free to lighten the mood and join your thoughts - and your followers - together with a conjunction or two.

Personal pronouns take the place of specific nouns: people, places, or things. They're used in place of a name to avoid repetition and stiffness. But what we're really talking about here is the personal pronoun "I."

In formal essay writing, it's best not to use "I" when writing about the industrial revolution. But, in informal writing, like on your new blog, you actually want to use personal pronouns such as "I" and "we." It's one of the best ways to engage readers and allow them to feel like they're getting to know you.

If you kick off a new blog post with something along the lines of "I hope everyone reading this post will find some inspiration in it," no one's going to cringe. Rather, they're going to cozy up to their desk and see what you have to say.

Again, if we're talking about the world of academia, do your best to avoid contractions. Contractions are a proofreader's paradise. They will read that college essay with an eagle eye, scanning for contractions and reconstructing them back into two words.

However, in the online world, it's actually easier to read an interesting article when contractions are incorporated. It's also the way way we naturally speak. So, feel free to break out "it's," "we'll" and "you'll" all you'd like.

This act of rebellion comes with a big condition. ...You can write a sentence fragment or two, from time to time, but only when needed for emphasis. You can end a series of sentences or a thought with a fragment, only if it's going to drive your idea home.

For example: Every morning is full of sunlight and hope. Sometimes, we rise to the new beginning and, other times, we struggle to shake off the sad dreams of the night. But always betting on hope.

So, in a way, sentence fragments can be very conversational and natural. Just be sure to use this tactic sparingly. You have a green light here for informal writing - and it's certainly something we do in everyday speech - you just don't want to overdo it, even in the online land of the free.

Oh, and if you're a poet, then the gloves come off. You can paint your prose in sentence fragments if it'll carry your poetic prowess with poignancy and power. In fact, feel free to scan these Examples of Free Verse Poems to see how the rebels roll.

The funny thing about this no-no in academic writing is that it's an absolute must in online writing. Okay. That was a little dramatic, but writing short paragraphs in an online format is paramount to readership and SEO success. SEO success simply means there's a chance one of the billions of online users out there will land on your webpage.

When people turn to a webpage and see huge globs of text, they're less likely to continue on. Microsoft once touted that we only have an eight second attention span. Today, that's become debatable, but there's a certain amount of truth to it. If people can't scan crafty headlines and move quickly through short paragraphs, they're likely to abandon your page for an easier read.

Google understands this too, showing SEO favoritism to blogs that incorporate crafty headers into the mix of short paragraphs. So, keep things short and sweet in an online forum. In fact, don't even hesitate to include one and two-line paragraphs as appropriate.

That sounds like a super "grammary" term, split infinitives. Basically, all it means is you can't split "to" and a verb. An infinitive would be something along the lines of "to go" or "to savor." We sometimes split infinitives when we place an adverb between "to" and the verb.

Technically speaking, it's wrong to write "She ran to her room to secretly savor the last candy cane." Sounds pretty nice, actually, if you're getting into the Christmas spirit. And who doesn't love a little alliteration? "Secretly savoring" makes it sound delightfully naughty, whereas placing "secretly" at the end of the sentence would reduce its impact.

Truthfully, you never want to overdo it with adverbs - those -ly words. They tend to bulk up your writing when concision is always the key (especially when you may only have eight seconds to pack a punch). But, every now and then, feel free to throw a wrench between "to" and its adjoining verb.

Be Whoever You Want to Be

Today, you can be whoever you want to be. You can start a sentence with "but," and end a sentence with "from." How truly rebellious! Just remember to "know your role." Be a free spirit online and enjoy all those digital connections. Contract away and use the personal pronoun "I" whenever it'll help you foster those connections.

But, don't kick off your next thesis paper with "I" or "but." And stick to the approximate five sentence minimum in collegiate essay writing. When you're out there sharing new ideas and exploring new pathways in the online social realm, however, feel free to break any one of these seven grammar rules. You never know what new pathway will come to light as you publish creative content for your fellow digital warriors.

When's the last time you broke a grammar rule and it turned out well? Feel free to share your rebellious ways in the comments down below!