Countable and Uncountable Nouns Made Easy 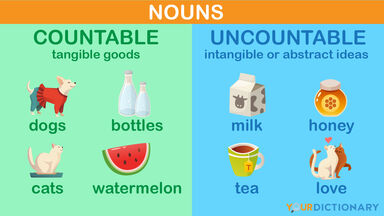 What Are Countable and Uncountable Nouns?

Much like their names suggests, countable and uncountable nouns are ones you can and can't count. Here's a quick breakdown of these two types of nouns.

Now that you have a simple understanding of what a countable vs. uncountable noun is, it's time to check out these two types of nouns in more depth.

Also called count nouns, countable nouns are those tangible nouns you can hold and count one by one. For example, if you have 12 pennies, well, you could count those pennies. A few examples of countable nouns include:

How to Use Countable Nouns in a Sentence

Countable nouns have distinct singular and plural forms. If you have one cookie, it'll come in the singular form. If you have a dozen cookies, it'll come in the plural form. Additionally, these nouns can be preceded by a number or the determiners "a" or "an." They can also be paired with modifiers or quantifiers, like "many" or "fewer." Explore a few sentence examples using countable nouns.

Even if you're considering an extraordinarily high number, like all the books in the New York Public Library, books are still a countable noun because you could put a number on it.

How to Use Uncountable Nouns in a Sentence

Uncountable nouns typically only have a singular form. If you have some water in your glass, it'll come in the singular form (even though there are several ounces of it). These nouns will never be preceded by the determiners "a" or "an." Rather, they're paired with an array of modifiers like "some," "a lot of" or "much." See a few examples of how an uncountable noun is used in a sentence.

Both Countable and Uncountable

Can you think of any nouns that could work as countable or uncountable nouns depending on the circumstance? If you've ever been to Belgium, you might have sampled their delectable chocolate. With that in mind, take a look at these two examples:

In the first sentence, it is implied that the person is offering a single piece of chocolate. The noun "piece," in this case, is countable. In the second sentence, "some" isn't an amount that can be clearly counted. Let's check out a few more countable vs. uncountable noun examples.

Nouns are a staple in the English language. They stand as the subjects of our sentences, our names, our hometowns, and so much more. Given their grammatical prowess, there are many different kinds of nouns beyond countable and uncountable nouns. Enjoy this extensive study on the different types of nouns.